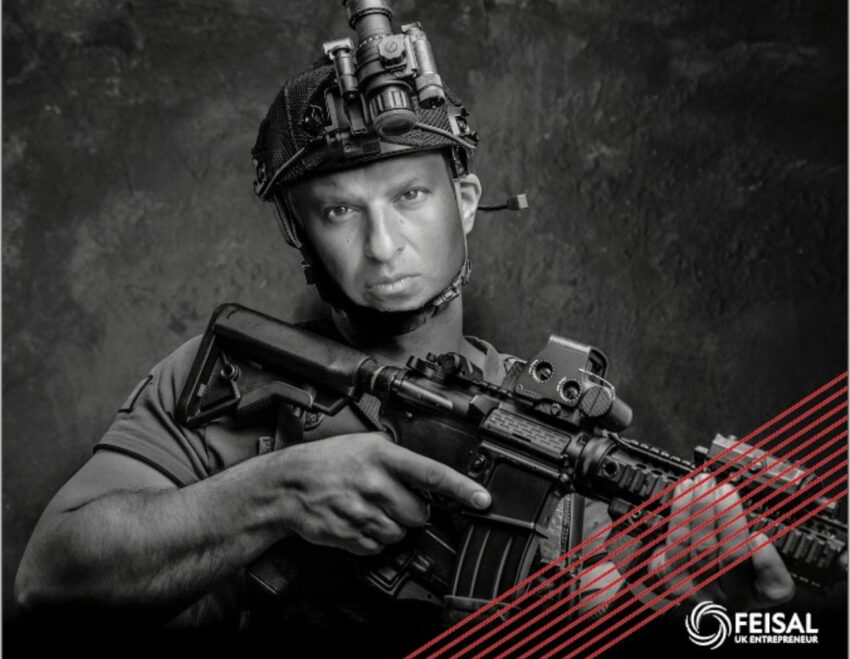 Entrepreneur Feisal Nahaboo is set to swap boardroom deals for dealing justice on the big screen after teaming up with a leading British production company.

Award-winning Shogun Films, named UK’s ‘Independent Film Production Company of the Year’, has agreed terms with entrepreneur Feisal Nahaboo—the founder of pharmacy group Alitam and accountancy firm Xeinadin— to feature in at least two movies over the next 12 months.

Based in London, Shogun Films is known for being a disruptive indie film company focused on high-level action movies for the international market.

Founded by veteran producer Jonathan Sothcott and his wife, actress Jeanine Nerissa Sothcott, Shogun has already produced two movies within the space of a year: the critically-acclaimed thriller Nemesis, and the action-packed revenge film Renegades.

Now it can add one of the corporate world’s biggest players, Nahaboo, to its roster, with the entrepreneur making his movie debut this autumn in action flick Crossfire.

Written by Chad Law and Josh Ridgway, the film is set in a shopping mall overrun by Neo-Nazis on Christmas Eve.

Nahaboo will play a federal agent who teams up with a cop stuck on the inside to prevent a massacre.

Though better known as a prominent mover and shaker in the business world, Nahaboo has been likened to action hero Jason Statham for his “tough-guy looks” and “alpha male” status.

The charismatic CEO is already said to have gained a significant female following on social media after the release of promotional images for Crossfire.

And with a background in amateur boxing, with him currently training to get back into the ring after several years away, he will have “no issues” carrying action scenes as the hard-boiled FBI agent.

Further casting details are yet to be released, but Nahaboo will also be starring in a second movie, fish-out-of-water cop movie Crackdown, written by Tom Jolliffe and which will again see him play a law enforcer.

Both Crossfire and Crackdown will be directed by Daniel Zirilli

Speaking of his unexpected entry into the entertainment industry, Nahaboo said: “It’s any child’s dreams to feature in an action movie.

“I’m blessed to have crossed paths with Shogun Films and I’m looking forward to working with them both on and off the set.

“I’m clearly not a prominent actor but I’ve worked for many years on the corporate stage and there’s definitely transferrable skills.

“I love to train, box and be theatrical and this is the right moment for me to do something full of adventure.

“I’m planning to feature in two movies as a good cop.  I’ve always wanted to play a hero and save the world. I now have my chance to fulfil a dream.”

Outside of his plans to become an action movie actor, Nahaboo is revered as one of the UK’s most visionary and successful entrepreneurs, widely renowned for his innovative and dynamic thinking.

He enjoys a reputation as one of the foremost wealth creation consultants in the UK, with over 20 years’ experience in helping accountants make substantial sums of money.

More recently, he has been celebrated as the creator of the revolutionary M&A vehicle, the Overnight Multiple Merger Model (OMMM), and has founded two businesses that have swiftly become market leaders in the accountancy and pharmacy sectors.

His first OMMM, Xeinadin—a world-first 122 accountancy-firm merger—was created in just 256 working days and has been hailed as a ‘corporate miracle’.

The merger was created virtually ‘overnight’ in May 2019 and immediately ranked as a top accountancy firm.

According to the Irish Times, Xeinadin posted revenues in May 2020 of £110.3million with £39million EBITDA (36% EBITDA)—a figure far higher than that typically seen in the sector.

All independent accountancy firms who joined the merger are set to receive substantial premium values from private investment firm Exponent, taking their valuation to a forecasted £320-340million.

It has been observed that what took Nahaboo just 256 working days to achieve would normally take around 50-100 years.

Feisal Nahaboo is also the name on everyone’s lips in the pharmacy world as the CEO of Alitam, the pioneering 100-plus store pharmacy group with collective revenues exceeding £120million turnover.

Through Alitam, Nahaboo is leading a much-needed radical reform of healthcare across the UK and Ireland.

This is now beginning to deliver the UK’s first fully fledged preventative healthcare service through the pharmacy industry infrastructure, underpinned by the expertise, skill and qualifications of pharmacists  and truly meeting the health and wellbeing needs of all citizens.

And by so doing, Alitam is reducing the substantial burden on NHS/HSE services such as GPs and hospitals.

While he has no plans to become a full-time movie star, he hopes to appear in further films and has also begun making calls to his fellow high-net worth network to involve them in future movies.

He said: “We have seen football transform with many billionaires buying clubs and dominating the industry.

“I see a similar trend in the film Industry and Shogun films have cottoned onto that. They are entrepreneurial, they make great movies and I can’t wait to get going.”

Though founded only recently, during the Covid pandemic, the company has already won an industry accolade—‘Best Emerging Independent Film Production Company’ at the prestigious SME Greater London Enterprise Awards.

Shogun has a strong creative partnership with veteran American action movie director Daniel Zirilli, who has made films with a plethora of action icons including Steven Seagal, Dolph Lundgren and Dave Bautista.

Shogun Founder Jonathan Sothcott is looking forward to the partnership with Nahaboo, whom he says is not only a “charismatic, visionary entrepreneur” but also has a personality with a “powerful screen presence”.

He said: “We are delighted to have Feisal Nahaboo on board. He is an amazing guy with a massive career both behind and ahead of him.

“Feisal is that rare thing: a charismatic, visionary entrepreneur with a genuinely powerful screen presence and I think everyone following his meteoric rise in business will enjoy seeing him locked and loaded in our action-packed movie, Crossfire.

“He has an amazing image which we will use in our action movies.  He is a delight and fun to work with and I know he will also help make a difference to our business through his high-level business acumen.

“I’m looking forward to working with him on this and as part of our wider plans to make Shogun Films the premiere provider of international action content in the UK and Western Europe.”

He added: “We won a major award recognising the remarkable 18 months Shogun has had at the eye of the storm of an unprecedented global pandemic.

“The team have responded rapidly and effectively to an ever-changing situation and the fact we have hit the ground running and produced two films, a book and a CD is a testament to our unshakeable conviction in our vision to become the leading producer of international action content in the UK and Western Europe.”

Commenting on Shogun’s future, Jonathan Sothcott said: “Shogun Film is rapidly becoming a production powerhouse, attracting premium creative and financial partners from all over the world.

“We are focussed on being the best and our first entry, Renegades, is a game-changing film both for Shogun and myself as a producer. It levels us up and puts us in a very different space to anyone else in the UK.

“Our core values of quality, commercialism and independence are somewhat at odds with those of the corporate behemoths which control the global production scene, but I think gives us a truly unique standpoint. We’re building something very special here”.