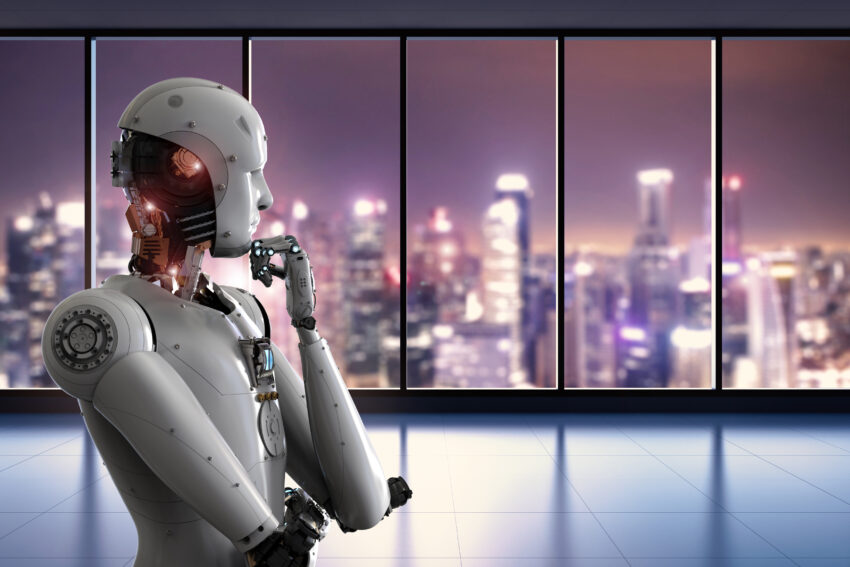 My name is Shamayun Miah. I have been working in technology and digital transformation for the last twenty years or so. I have noticed that Artificial Intelligence (AI) and Automation is causing quite the stir these days.

Two of the industries most impacted by AI are Financial Services and Retail Industry.  Which is surprising considering that it’s been around for quite some time. As with all revolutions, the age of AI has presented an uncomfortable, threatening, and therefore, resisted future. It is predicted that 800 million individuals globally could be displaced by AI and automation and need to find new jobs by 2030. Around 1 in 5 jobs will be impacted by AI and automation.

So, it’s not at all surprising that the dawn of artificial intelligence has been met with scepticism and fear.

I’m sure you’ve all heard somewhere, at least once, that your job will soon be replaced with a robot that can not only perform the same daily functions but also works for free.

While that may be true in some cases, there are quite a lot of advantages artificial intelligence provides as well. So rather than being intimidated, perhaps we should ask ourselves a question. What if AI can better our lives, allowing us more time for the people and activities that we love?

In this article, I will discuss how AI could actually help improve our work-life balance by automating tasks, performing undesirable jobs, and freeing up time for more important things like leisure or family life.

What is Artificial Intelligence?

Artificial Intelligence (AI) is a fancy word for technology that has the capacity to develop solutions to issues it’s presented with, much like people do. AI can help better our lives by making processes more efficient and eliminating mundane tasks to make room for creativity.

Artificial intelligence is a powerful tool that can help us as humans if we let it. It’s not inherently good or bad, but rather has potential that lies entirely with those who wield it.

Let’s begin by looking at some examples from everyday life to better understand how AI can help us. Please note, however, that this is just the beginning of a developing technology.

The Potential of Artificial Intelligence

Artificial Intelligence is a tremendous resource for the future. The human and machine cross-section gives workers more time to engage in activities that are enjoyable and fulfilling, as well as allowing us to tend to more tedious tasks we wouldn’t normally be available for.

The common consensus is that these robots will replace the workers that currently do menial tasks, but it’s more likely that a pleasant compromise will be reached. That is, a combination of the new and old where workers are able to do things they love while still having a stable source of income.

When considering AI technology, it’s important to think about it from an optimistic standpoint rather than being afraid of what may happen in a future that’s impossible to predict.

In the end, we shouldn’t be afraid of technology taking jobs because that’s how things tend to change in this world we live in. Even if your job is one that is replaced with artificial intelligence, a new one will likely take its place that allows you a higher pay rate with fewer working hours.

What matters the most is that the future merges human and machine interaction to bring us flexibility and gives us more opportunities to do what we love.

A Historic Example of a Human and Machine Success Story

Beginning in 1811, the Luddite movement of textile workers came about when workers began protesting against automation, which later led to attacks and looting.

Because they were worried about these machines robbing them of their livelihood.

This example serves as an important lesson: when it comes to the future impact of artificial intelligence and automation on our employment, fear is a very typical response.

The same worries that you’re experiencing now have been raised numerous times before and have been proven incorrect. Despite these worries and concerns, every technological revolution has resulted in creating more jobs than were lost to technological development.

Another example is the “Industrial Revolution in the latter half of the 18th century. The workforce transitioned from labour-based to manufacturing work due to technological advancements.  In the 1980s with the introduction of the personal computer, which resulted in a new IT global workforce’’ – Shamayun Miah Technology leadership

How Artificial Intelligence can Benefit Our Lives

Artificial intelligence is the future, and there’s not much that can change that. It has been growing, evolving, and maturing for years now. And while it may have started out as a novelty that couldn’t do much more than play chess or beat you in Jeopardy!, it’s quickly becoming an integral part of our daily lives.

AI can benefit our lives in many ways:

As Artificial Intelligence continues to get smarter, it becomes more adept at identifying inefficiencies and assigning them to your digital assistant or robot teammate. We’re already seeing this with Amazon’s purchase of Whole Foods.

Customers will soon be able to order groceries online and have items delivered within two hours without ever interacting with another human being, freeing up time for other more important and meaningful work.

One example of artificial intelligence in everyday life is online tutoring services. These are companies that provide students with live, one-on-one tutoring sessions over an internet connection.

The AI component is presented through the program’s ability to analyze student performance and adapt to their needs, tailoring lessons based on what they’re not understanding. This is different from having a robot stand at the front of the class reciting facts or spewing out answers. Rather, AI adapts to the student’s individual needs and adjusts accordingly.

Additionally, there are even companies using Artificial Intelligence to create virtual reality games for jobs. Players can work through various jobs like office worker, gourmet chef, and even convenience store clerk.

While this may seem like a silly game, it’s actually an effective educational tool for children because of its ability to let them try on jobs that they might have in the future. Through it, they gain experience in real-life scenarios that can help them narrow down potential jobs.

Unfortunately, it’s this possibility that scares people – they feel like their livelihoods are at risk.

But this is not necessarily true. While technology changes the way we can perform, it also changes the world around us, opening us up to brand new opportunities. The next time you open a computer program or use your phone to text someone, think about what artificial intelligence has made possible for you.

You will always have the ability to forge your own opinions. Before you make your final judgement on AI, though, I recommend taking this article into consideration.

You can focus on the negatives that represent fear of the unknown, or view AI for all the potential it has and will have in the future.

Jump on board now and influence what it becomes, rather than waiting to see what it may develop into.

Take the path less travelled. Your business will thank you for it.