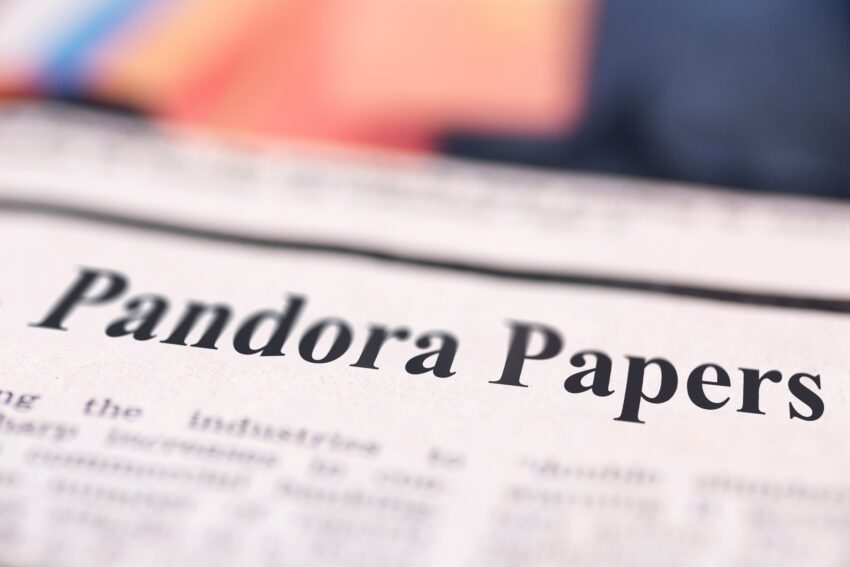 In October 2021, the International Consortium of Investigative Journalists (ICIJ) released the Pandora Papers, a collection of approximately 12 million private corporate records obtained improperly from more than a dozen financial and legal services firms.

Through the efforts of more than 100 media organizations and 300 investigative journalists associated with the ICIJ, the Pandora Papers material quickly appeared in digital and print publications across the world. News stories and features related to the Pandora Papers appeared in French, Irish, Spanish, Hungarian, Serbian, Australian, British, and American media, among others. The release and subsequent media coverage included information about the financial behaviors and business activities of clients of Trident Trust Company Limited, Alpha Consulting Limited, Asiaciti Trust, and Fidelity Corporate Services Limited.

Many if not most of the individuals and entities named in the Pandora Papers followed applicable national and international law and had done nothing wrong. Nevertheless, the sensational and sometimes misleading coverage of activities and involvement of high-profile figures — including multiple current and former heads of state — created significant reputational challenges.

We can’t turn back the clock on the Pandora Papers. However, we can learn from media coverage of the incident and others like it, such as the Panama Papers and LuxLeaks.

For a variety of reasons, coverage of complex events like these is often misleading, incomplete, or outright inaccurate. By examining this coverage critically, we can come to understand the root causes of these failures and provide a guide for journalists and media organizations that wish to do better. The broad strokes of that guide are already visible in higher-quality coverage of incidents like these.

The Pandora Papers: How the Coverage Fell Short

Mainstream media coverage of the Pandora Papers tended to be simplistic and sensationalized.

With notable exceptions, it did not discuss the origins of the release or offer actionable solutions for preventing similar events in the future.

Nor did it address the national and international legal frameworks that enable and encourage the financial strategies outlined in the release. Where noted at all, these frameworks were uncritically portrayed as bad. Most media covering this event made little effort to explore legitimate proposals to change the international tax system in ways that address the public’s demands.

What did media coverage of the Pandora Papers look like? The stories that got the most exposure tended to have some or all of these characteristics:

It’s not difficult to imagine reputational and financial harm that follows from coverage of such a complex event through a sensational, skeptical lens. To their credit, many of the firms named in the Pandora Papers took the issue head-on and issued responses addressing their perceived roles while noting that legal and client confidentiality considerations precluded more fulsome responses.

“We conduct relevant due diligence in respect to all of our clients at the time of establishment of the relationship and during subsequent compliance updates. All of that information is on file and can be disclosed to a competent authority, for which appropriate legal procedure exists. We are not allowed to disclose any material nonpublic information to the press, even if the disclosure of such information might benefit us.”

“We take this opportunity to inform you that your allegations about us are premised on inaccuracies and incomplete information. …We maintain a strong compliance programme and each of our offices have passed third-party audits for anti-money laundering and counter-financing of terrorism practices in recent years, which reflects our intense focus on this area.”

Getting It Right: Balanced Coverage of the Pandora Papers

Media coverage of the Pandora Papers was not uniformly inadequate. Some reports on the release took a more balanced approach by:

It’s not necessary to compromise one’s journalistic ethics or avoid “tough questions” to take a balanced approach to reporting and analyzing complex international events like these. Many respected journalists and publications have managed to thread this needle, and their audiences are better-informed for it.

The Pandora Papers was only the latest in a long string of large-scale corporate and financial information releases covered widely in international media.

These releases also drew on material that may or may not have been obtained illegally or without the permission of its subjects. Their names may be familiar to those who follow international financial news: Panama Papers, LuxLeaks, Mauritius Leaks, and others.

Coverage of these earlier releases was no better. For the most part, mainstream international media missed the mark. They chose sensational, simplistic stories over nuanced, balanced coverage that told both sides of the story and centered a variety of valid viewpoints. Readers came to associate these incidents not with questions about the origins of the material or concern about the legal frameworks that encourage secrecy but with splashy headlines about Vladimir Putin’s wealth or inaccurate descriptions of legitimate tax-minimization strategies.

To understand why media reporting on complex data incidents so often misses the mark, we must understand the incentives driving this reporting as well as the very real limitations — both in terms of reporting resources and technical expertise — that constrain accuracy and comprehensiveness.

Why Do Media Get Complex Stories Wrong?

We can take an honest, critical look at the failings of complex-story reporting without disparaging hardworking journalists or tarnishing the entire media industry. Media has always been a difficult and competitive business, and the challenges facing it have only grown in recent years.

Those challenges are evident in the problematic reporting of events like the Pandora Papers. They include:

These conditions took years to develop and can’t be turned back overnight. It’s not clear they can be reversed at all. Social media is here to stay; newspaper classified ads won’t return.

So, should we accept that the mainstream media will continue to misreport complex stories? Or can we hold out hope that it can do better?

A Plan for Better Coverage: How Media Can Improve Coverage of Stories Like the Pandora Papers

There’s ample cause for optimism. We see it already from mostly independent reporters and smaller publications that took the time to get the Pandora Papers story right, or at least to treat it with the balance it deserves.

The rest of the media can learn from these examples, again without compromising their integrity or even altering their editorial perspective. They can simply follow general principles like:

Let’s be clear: No one is perfect. The media industry plays an important role in helping the public sort fact from fiction, but individual journalists and editors do get things wrong from time to time. We shouldn’t hold the occasional isolated slip-up against an entire guild.

Yet we can ask the media, as a whole, to do better. We should hold the industry to that — and hold them accountable when it falls short.