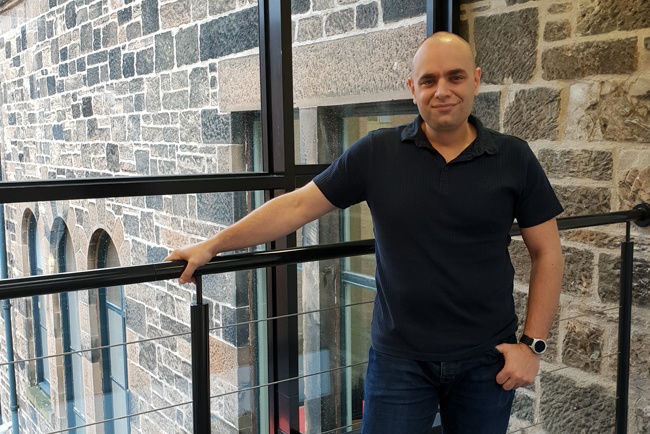 Entering an established and mature market which is ever-evolving is never an easy task for any new company.

To do so is perilous. To ignore such peril and not just keep ahead of the curve but to re-draw the next curve is rare.

This is exactly what Miles Chicoine is achieving as founder and Managing Director of Voquent.com in the voiceover industry. Having spent less than three years watching and researching the sector, he’s launched an evolving web platform enabling creatives, marketers, studios, agents and production companies the ability to review, shortlist and hire talented freelance voiceover artists in any language, dialect or country in the world.

“It’s been exciting to watch everything unfold,” says Miles. “With thousands of highly experienced voice over actors registering with us in less than a year, there’s clearly a need for what we are offering. Our current trajectory suggests that Voquent will easily be one of the biggest voice acting databases in the world within the next 12-18 months.”

Voquent already boasts an array of voiceover samples that is nothing short of extraordinary.

Miles adds: “Growth and disruption go hand in hand. I think our model is well received because we focus on helping our customers to find exactly what they want as quickly as possible, by identifying, distinguishing and indexing the critical capabilities of voice over artists, whether it’s the specific accents they’ve developed over years or their experience and versatility as a performer. Our platform enables a casting agent to pinpoint the specific attributes that will maximise the emotional engagement they seek with their audiences.”

The vision and realisation Miles has could lead to major implications for how the voiceover industry operates a global community. Starting with an office in London; the influx of activity has led to investment in additional resources, including the recent opening of a second base in Glasgow.

“Our new Govan office sits in the heart of Glasgow’s media city. It’s becoming the operational nucleus of an incredible growing network of professional studios, agencies and production companies. Scotland has also grown to become one of the world’s strongest advocates of equality, diversity and inclusiveness and has a longstanding history of supporting innovative companies with an international focus, so it was an easy choice to open an office there.” explains Miles.

However, this was not a leap in the dark. Voquent benefits from a team who have a wealth of insight and experience in the voiceover industry. Miles explains: “I first needed to surround myself with people who have a deep knowledge of this industry. The initial plan was to solve some of the most critical challenges in the casting process and there’s no way that we could have anticipated the sheer scale of the response we’ve received. We attribute that to our commitment to quality but most importantly, supporting the customer journey regardless of what stage they are at in their project.”

What sets Voquent apart from other similar – on the face of it – looking companies, is the sheer level of experience offered by its members and the detail they have gone to, in describing the attributes and qualities of each and every voice sample; particularly the language or accent spoken.

Not content purely with generic accent or language filters such as ‘Standard American English’ or ‘European French’, early on Miles identified finding voice actors who could perform in authentic localised accents. Voquent launched its website in the summer of 2018 with more than 1400 researched and categorised dialects and accents, instantly dwarfing every other voice acting database in existence. Tracking unique versions of neutrality were key to creating a genuinely useful system for globally focussed creatives.

It is hard not to be intrigued by what Voquent.com offers, it’s clearly aimed at voiceover casting and associated services like translation, post-production and closed captions but it’s also a veritable playground for linguists to explore a huge variety of regional dialects and accents, including fluent Klingon!

ABOUT THE AUTHOR:
Philip Chryssikos is an award-winning journalist, broadcaster and voiceover artist, regularly heard on Classic FM, LBC and Smooth Radio, having spent a decade previously as a music presenter on Capital FM London.