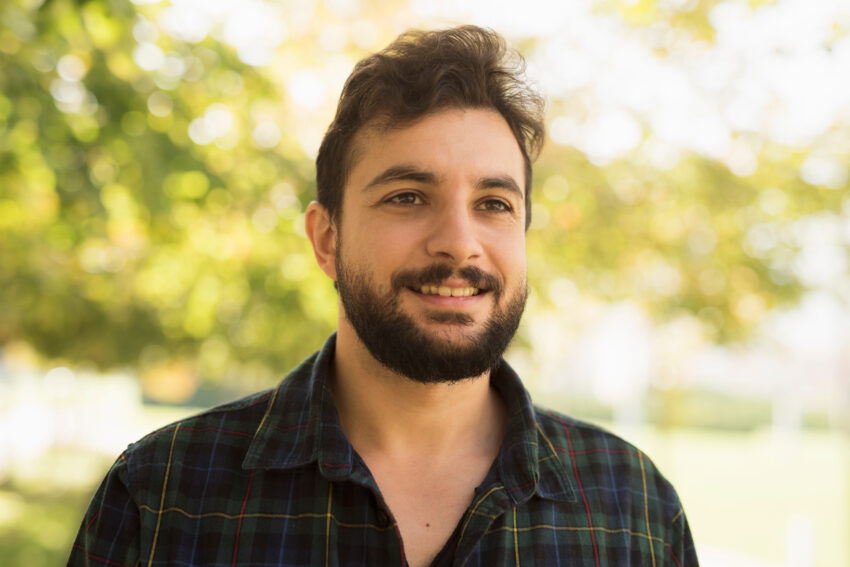 Moshe Peretz is a young entrepreneur from Mackinaw City, Michigan about to debut a new product line of musical accessories, such as customized guitar cases and straps.

He is also a musician of some notoriety in the Wolverine State, having toured off and on with various backing bands over the past decade and a half.

During his formative years, Moshe developed a wide variety of interests. He credits a family road trip to Tennessee for sparking two of the passions that have thus far defined his life; music and travel. As it was the first time he had left his home state of Michigan, Moshe Peretz became fascinated by the sights, sounds, and smells of the American heartland, and he resolved to dedicate his life to exploring as much of the country as possible. To date, he has made good on that promise to himself, having visited every one of the lower 48 states, as well as parts of Canada and Mexico. While on that same vacation in Tennessee, Moshe and his family visited the Grand Ole Opry in Nashville, which kindled an appreciation for American country and western music, and Graceland in Memphis, which ignited his lifelong passion for Elvis Presley, rockabilly music, and rock and roll in general.

In high school, Moshe started a garage band that mostly played rockabilly and country music. The band was called ‘Mackinaw’ in honor of his hometown, and achieved a degree of success regionally. Predicated on this success, he and his bandmates hit the state’s nightclub circuit on evenings and weekends. While on tour, Moshe picked up a button commemorating every town they played, sticking them all on the same jean jacket that he wore during every performance. As time passed, this jean jacket gained a moderate amount of fame in its own right, becoming synonymous with the band, and earning its owner the nickname ‘Michigan’ Moshe Peretz.

As he grew into adulthood, Moshe enrolled in Michigan State University, studying business. Still playing nightclub gigs in Michigan and the surrounding states whenever his school schedule permitted, Moshe soon cultivated another passion; that of food. Favoring the term ‘Epicurean’ over that of ‘gourmand,’ or the more common ‘foodie,’ even to this day, Moshe takes great delight in sampling the authentic local cuisine wherever he happens to find himself during his travels. Among his favorite foods are blackened catfish, cheesy grits, corn bread, clam chowder, and collard greens.

What do you currently do at your company?

The company is still in its infancy, so right now I sort of do everything. As the company grows, I plan to  hire some people to help me out, starting with a bookkeeper. Although I have a degree in business, and I can read spreadsheets and crunch numbers, it doesn’t excite me the same way that product development and marketing does. I’d rather hand the accounting off to someone else.

I would say that the inspiration was equal parts Elvis Presley and Rhianna. Elvis was a trailblazer in more areas than just rock and roll music. He was also one of the first celebrities to realize the potential in attaching his name to merchandise. But he never owned his own business per se–he just endorsed certain items. But whereas Elvis blazed a trail, Rihanna built a massive entrepreneurial empire, which is the kind of success I’d like to emulate.

I work hard, I deal fairly with people, and I always try to keep things interesting.

I’m sure that a lot of businesspeople do this but don’t own up to it, but when I’m tired in the middle of the day, I take a short nap. It’s not every day, and it’s never for longer than an hour, but I find that when I have a little nap, I wake up rejuvenated and ready to kickstart my efforts with a fresh mind. I usually call it a ‘disco nap’ or a ‘siesta.’

Tell us one long-term goal in your career.

Within ten years, I want my products to be available everywhere in the United States.

Would it be corny to quote Journey? “Don’t stop believing!” I would tell my younger self that dreams really can come true with enough hard work, follow-through, and luck. I would also tell young Moshe to always have faith in your own abilities.

What are some of your favorite things to do outside of work?

I still love to play live music whenever my schedule permits. To be honest, I don’t think that’s something I’ll ever stop doing, even if it’s only once a month or so. Taking the stage and strumming out a few chords of rockabilly or country and western music just fills me with joy. Beyond that, I love traveling and trying new kinds of food wherever I go. Music, travel, and food—I suppose I’m an easy man to please.

How would your colleagues describe you?

I think my friends and colleagues would describe me as optimistic, tenacious, and pretty laid back. I would hope they’d also describe me as competent—both in business and in musicianship.

Who has been a role model to you and why?

I’ve always looked up to my father. He held down a job as an accountant for a large company for more than thirty years, and somehow never went crazy. I’ve always marveled at that. He did it to make sure that his family never wanted for food, shelter, or education. I don’t think that I’d be able to do that, personally. In a way, he sacrificed whatever dreams he had so that his children could realize theirs. And with the launch of my new business, I don’t plan to let him down in that respect.

What is one piece of advice that you have never forgotten?

“Never forget who you are.” Believe it or not, I heard that piece of advice after performing a set at a nightclub in Saginaw in 2014. I had tried to integrate electronic instruments into my act to give things a more modern and dancey feel, but the experiment flopped. I stayed for a beer after the show, and a person who had watched the performance approached me at the bar. It turns out she was a big fan of rockabilly music, as well as country and western, and she’d seen a handful of my sets over the years. She said that she’d enjoyed them, but that my new sound didn’t suit me at all. That’s when she said “never forget who you are.” I’ve always remembered that moment.

What are a few influential books you’ve read and/or websites you keep up with that you’d recommend?

Two autobiographies spring immediately to mind. The first is Cash by Johnny Cash, and the second is Miles by Miles Davis. These books chronicle the lives of two of the most fascinating musicians that America has ever produced.

What advice would you give to aspiring to succeed in your field?

Never give up. It’s cliché, but great truths often are.