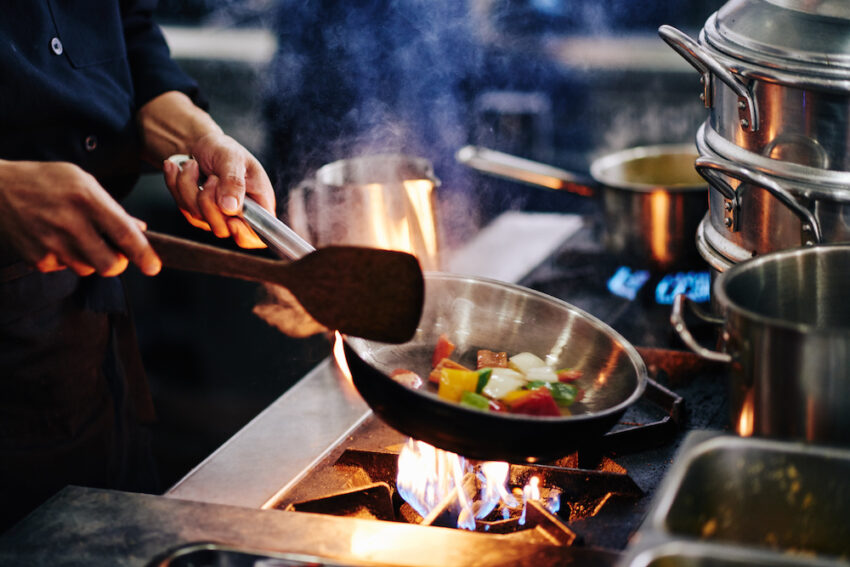 Even as a young boy, Adrian McKague was drawn to food. He was fascinated by the various methods of preparation and presentation entailed in properly making a meal, and smitten with the near-endless possibilities for flavours and textures.

In fact, Adrian was so passionate about fine cuisine that he volunteered to help out the workers in his high school cafeteria, even going so far as to present new recipes and techniques for them to use to dazzle the students. After he began volunteering, there was agreement among his fellow students that he had almost single handedly improved the menu.

After graduation, Adrian McKague enrolled in a noted chef’s college in Toronto. There, he received high marks and glowing praise, including some formal recognition from the school’s internal awards committee. This validation only further fed his desire to pursue a career as a chef. Within a few months, Adrian had obtained a chef’s trade certification and a Red Seal endorsement, as well as a Chef de cuisine certification from the Canadian Culinary Institute of the Canadian Federation of Chefs and Cooks.

It was then that Adrian decided he needed some worldly experience to augment all that he had learned in college. He took six months off to tour France, Belgium, and Italy, tasting the storied local cuisine at its source and finding renewed inspiration for his career as a gourmet chef.

After returning to Canada, Adrian found employment at a number of the Greater Toronto Area’s most renowned restaurants, rising through the ranks to become the head chef of one such fine dining establishment. Unfortunately, that experience left him unhappy for numerous reasons. After resolving to derive more satisfaction from his career, he decided a big change was in order. As the 2000’s turned over into the 2010’s, Adrian McKague started to offer his services to individuals as a private chef, primarily through small classified ads in some carefully chosen periodicals circulated in Toronto. Eventually, he accepted a position with a wealthy couple; a position he still holds.

What position do you currently hold?

I am a private chef employed by two lovely benefactors; a wealthy Toronto couple with superlative taste. Each day, I prepare lunch and dinner for them and whatever guests they may be entertaining. I also leave them a late night snack before leaving for the day. They are very gracious people, highly appreciative of my work, and I am incredibly lucky to work for them.

What defines your way of working?

In one word? Quality. I strive to attain the highest quality in my work at all times. I buy only the freshest ingredients. I use only the best appliances and cookware. And, even though many of them are of my own creation, I suppose I’m not above saying that I’m guided by only the finest recipes.

When I’m in the kitchen, I immerse myself in my work. I lose myself in it. I get transfixed. I’ve heard such a phenomenon described as the ‘flow state’ before. It is the single greatest key to my productivity, and I think it happens because I love cooking just that much. If everyone could experience this so-called ‘flow state’ during the course of their everyday work, the world would be a much better and happier place.

Tell us one long-term goal in your career.

I would love to have the chance to cook a meal for an important foreign dignitary, such as a visiting head of state. That would be magnificent!

I would give my younger self some advice about avoiding working in restaurants—even the high-end ones. “It will be a waste of your considerable talents, Younger Self, and not in any way worth the aggravation,” is what I would say to him.

What are some of your favourite things to do outside of work?

I ride my bicycle a lot. I try to go for a lengthy ride at least once a day. I love watching classic movies. My favourites are film noirs and screwball comedies, usually from the black and white era. I also collect vintage cookware of all descriptions.

How would your colleagues describe you?

It’s well-known in the culinary circles of Toronto that I have exceptionally high standards. That being the case, I think my peers would describe me as an exacting, borderline perfectionist person. I also think they would characterize me as very organized.

How do you maintain a solid work life balance?

Ever since I left the commercial food service industry, that has been much easier to achieve. Now, instead of working all manner of hours six or seven days a week, I have a very well-defined schedule. I work from noon to 8pm, Wednesday to Sunday, with Mondays and Tuesdays off. On my days off, I make sure to recreate and nurture my own personal development. With respect to work life balance, I am quite content, currently.

What are some of the keys to your success?

Fresh ingredients, an excellent kitchen, a well-rounded education, and, pardon my lack of humility, an innate preternatural ability to cook extremely well.

What is one piece of advice that you have never forgotten?

When I toured Europe after college, one of the secrets imparted to me by a talented chef from Southern France was this: “Don’t be afraid to cast aside the measuring cup and use your intuition.” That really resonated with me. I employ that method to this day, although I wouldn’t recommend it to amateurs.

How do you measure success?

These days, the gastric satisfaction of my two employers is the best measure of my success. If their bellies are full and their refined tastes satiated, I know that I have done my job well.

What advice would you give to aspiring to succeed in your field?

The advice I would give to would-be gourmet chefs is to take pride and joy in your work! And not just the finished product, but the whole process of creating beautiful meals.