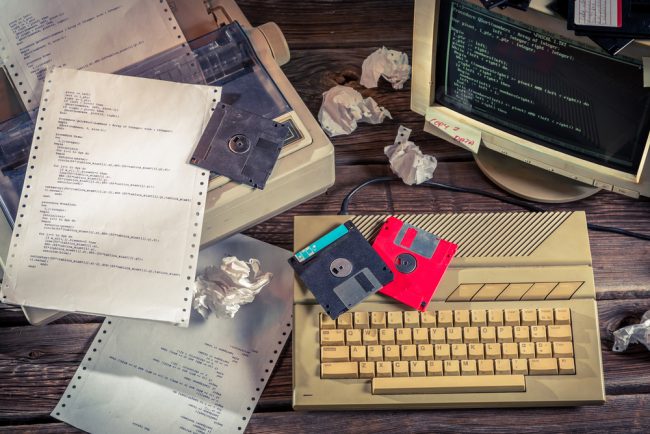 The IT department was born in a different time. When it first came to be, technology was a scarce resource, controlled by a select few in an organisation from the inside out.

The average employee had little say in which coveted applications they’d be using to do their work.

IT knows best, after all.

But today, the tech landscape has obviously taken a sharp turn. Employees can get their hands on whatever application they’d like – from file sharing apps to communication platforms – to implement into their work processes. IT is no longer the only one buying technology. In fact, CMOs will spend more on IT than CIOs by 2017, according to Gartner.

Legacy IT is being transformed into user-driven IT, and cloud computing and mobile devices are moving company information outside of the enterprise data center. It’s a daunting reality for some IT departments, due to security issues and an overall loss of control. How do CIOs need to react?

Legacy IT and a driving change

Legacy IT consists of a patchwork of apps that are neither cloud native, nor built for mobile first – they were developed in a time when smartphones didn’t even exist. Think enterprise resource planning (ERP) management software, for example. First developed in the 90s, the software hosts a suite of applications that collect and interpret data for industries like manufacturing, finance, marketing and sales.

With legacy IT, users aren’t necessarily a factor in purchase decision making. Instead, traditional IT departments often decide to buy an application based on the features it includes, with no regard to usability testing, or how easy it will be for business users to adopt.

It’s what happened at Avon in 2013. The brand put a stop to a $125 million multi-year management software project, when the platform negatively impacted business operations. It was so difficult to use that a significant amount of Avon representatives left the company–a pretty hefty blow.

But today the IT environment is changing, something everyone is calling the Digital Transformation. As employees are purchasing accessible cloud applications on their own, 40 percent of IT spending is out of CIO control. And while legacy IT was difficult to understand and took weeks of training, these apps – think HubSpot Sales or DropBox – are intuitive and user friendly, making it hard to see how employees would leave application purchasing solely up to IT departments ever again.

The digital transformation is causing legacy IT to lose control. While IT organizations understandably want to keep an eye on enterprise data – privacy and security regulations often require it – people are using cloud services and personal devices for work, often without the blessing of corporate IT, called Shadow IT. This means company data is floating around on the cloud – and IT has no idea how secure it is.

But employees aren’t bypassing IT systems or policies out of malicious intent. Rather, they want to be smarter and faster at their jobs. So IT needs to find a way to empower employees to work the way they want, while still protecting company data. They need to incorporate cloud applications into their systems.

IT departments are already starting to combine their own initiatives with employee-vetted cloud initiatives. According to Gartner, 50 percent of IT organisations will support services outside their IT portfolios by 2018. And 25 percent of larger companies will have a strategy to make their computing environments similar to consumer computing experiences.

“The user experience drives adoption, and user adoption is an important first step toward realizing business value from big investments in enterprise systems,” said Alan Langhals, a principal with Deloitte Consulting, on this Deloitte blog.

Organisations need to put people first. Not IT. They need to listen to the app recommendations business users give them, and develop a new set of IT tool requirement – such as ease of use, integration with other cloud apps, and mobile first. And to test these new applications, IT needs to run business-led pilots – before making large scale purchases – to find out if employees actually like using them.

As IT departments embrace the digital transformation, their roles will unquestionably change. Instead of purchasing legacy IT applications, they will be vetting mobile and cloud apps to make sure the apps are appropriate and secure. For IT, it’s a balance between giving employees what they want, and staying in control. And for the organization, that’s a win-win situation.

Amit Kothari is CEO at Tallyfy, a cloud app that manages your business processes consistently and effectively using powerful checklists