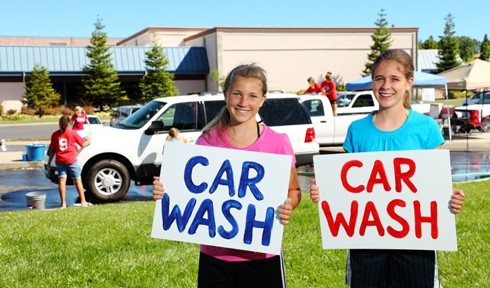 At a time when we are all tightening our belts, I wasn’t surprised to hear that a local sponsored event was short on people wanting to take part this year – for the first time ever.

Of course, sponsored events raise a huge amount for charity every year and are invaluable to the various charities that run them.

However, whenever my son takes part in a sponsored activity organised by his school I always feel awful about asking people to reach into their pockets.

Whilst his taking part raises money for the charity it feels as though his family and friends can’t really say no to sponsoring him because they want him to succeed personally.

But this is all rather one sided.

And asking for sponsorship is particularly difficult when we know we are all being a bit careful with our money at the moment.

It isn’t that I mind donating money to charity – we donate a lot each year and also do quite a bit of fund raising.

People who are doing a sponsored run, cycle or mountain climb – or whatever it is – feel that they are doing their best to raise money for charity but are also concentrating on something that is a challenge for themselves – something that they particularly want to do.

They twist the arm of everybody they know to donate something to their chosen charity and the charity ends up getting some money out of it – so what is wrong with that?

I have read some statistics that suggest that charities would be a lot worse off without people getting sponsored for things.

However, l’m going to stick my neck out here and say that I don’t think I’m alone in cringing at the moment when yet another smug person asks me to sponsor them for something which is really all about their own self-fulfillment.

Half the time I don’t necessarily agree with the charity they have chosen but I feel bad if I say no when they send me one of those e-mails asking me to sponsor them.

In a time of recession, I don’t have huge amounts of surplus cash and so when l do support charities l want to choose those that l support fully. I have my own priorities and no, for me those priorities don’t include animals I’m afraid… people kind of come first.

So why do I think that asking for simple sponsorship is not the best way to raise money for a charity during a recession?

And why would another answer be better?

Firstly, l believe that at the moment, people need something back in exchange for their money, so I don’t think individuals taking part in a sport-related activity are raising anything like as much money for that charity as they could be by doing something different.

Secondly, when people ask others for sponsorship it can make them feel guilty if they decline even if that person donates lots to other charities anyway. I personally feel that we don’t need any more guilt or bad feeling to spread about at the moment!

Thirdly, for children in particular – and indeed for all of us – it would be a more valuable educational experience for them to try to raise money for charity in a more business-like way.
Learning from the business world

I think that if people really want to raise money for a particular charity they could do much better by providing a product or service in their own time and spending all the time they would have spent training for the sporting challenge doing something worthwile for others.

For example, what about baking cakes for all of your friends? Or washing cars? Or planting some seeds and selling the produce at a local car boot sale or by the side of the road?

Or, what about using some of the skills you use at work to create something that people actually want and then donate all or a percentage of what you earn?

You could also ask the company you work for if they have any surplus stock you can sell for them.

Everybody can do something that is worth money to other people, surely?

Odd jobs, ironing, babysitting, washing up, drawing pictures, making cards – whatever it is you can do.

If you fill some of your spare time with this, then that is surely a much better way to make money during a recession when people need something in return if they are to reach into their pockets?

And what better experience for a child (or adult!) than to think of it as though they are starting their own mini-business for the sole purpose of raising money for charity.

If you can find £50 capital then you could even buy something wholesale and sell it on at a mark-up.

Another option is to donate a percentage of your earnings to your chosen charity or volunteer your time to a local hospice, homeless shelter or helpline.

The upshot is, there are a huge number of ways of raising money for charity that don’t involve running, swimming, cycling, climbing or any of the other sporting endeavours that have become run of the mill (excuse the pun!).

I really do wish that the current mindset with regards to charity sponsorship could be changed – it seems to me that people who want to raise money for charity need to take part in a big event or challenge when in fact there’s a whole host of other things they could do instead.

A couple of months ago, a customer of mine wrote to me as she was looking for sponsorship to climb a mountain.

She had some skills in marketing so in exchange for my sponsorship she was offering website links and so on. I thought this was a great idea.

However, when I looked into it the links she was suggesting would have actually done more harm to my SEO rankings than good so we didn’t go for that.

But I did bung her a few quid purely because she had thought what she was asking for and had tried to actually get more sponsorship by offering some kind of service for businesses.

If you want to cycle a long way or run a marathon – please do it but acknowledge that simply asking people to sponsor you whilst we are all still reeling from recession isn’t necessarily the best thing you could do to raise money for charity.

Instead, why not ask for sponsorship and offer something extra in return (e.g. l’ll wash your car if you sponsor me more than £20).

Perhaps then we can get the best of both worlds?