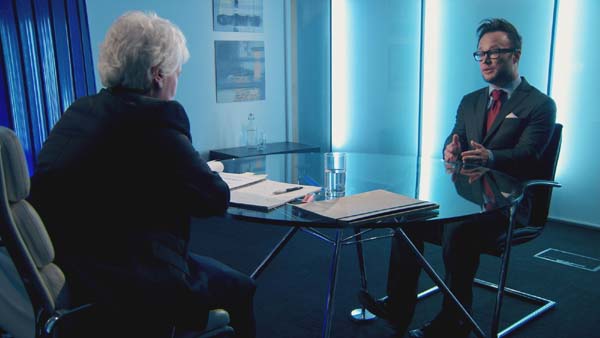 Sadly Jordan never made it beyond the first three minutes of one of his and as for the others, we all have a pretty good idea what first impression they would make – this was going to be an interesting episode for sure.

This was where they were going to be grilled, background checked and cross examined within an inch of their lives. There was no time now for game playing. Their secrets would be exposed. Francesca’s boast of a £5 million turnover and whether Jordan actually owned the idea he had, were being scrutinised by Claude Littner (current Chairman of Viglen), Margaret Mountford (Lord Sugar’s aide), Claudine Collins (Managing Director of MediaCom) and Mike Souter (publisher of the free men’s magazine ShortList). I watched with my hands over my eyes for large parts as each and every interviewer ignored the ‘interview tips’ and ‘how not to interview tips’ I have given in this publication before! There were sexist comments, ageist comments and leading questions galore. It was cringe worthy but also fabulous viewing.

This week was the first time the business plans would be dissected and considered in full. Claude stated one was ‘crap’ and Margaret’s eyebrows considered another and found it wanting, giving Alex’s eyebrows a run for their money.

Leah was credible throughout; she knew her numbers down to the cleaner’s salary, she admitted how much she had grown throughout the series, and was cool calm and collected through her grilling’s. Her plan was to open a series of facial aesthetics clinics. The conclusion was she was competitively priced, had done her homework and so was very credible. In a week where John Inverdale’s ‘not a looker’ comment has been the talk of the media she was selling just that, with her looks and smart brain to back it up.

Neil had an inconsistent plan of getting people to sell their own homes but then trying to get estate agents to buy into the idea and the website. Even after five people, including Lord Sugar, questioned him and asked for plan B he stuck to his idea; maybe naively or maybe arrogantly. Either way he was described as the right man with the wrong plan. Gutted doesn’t come close to how he reacted.

Francesca played fair throughout this series. She didn’t like game playing and was true throughout; hers was a plan to open a new branded series of dance studios but Lord Sugar felt whilst her plan had legs, she didn’t inspire or set the world on fire. Yes she was a self-starter but there was a question as to whether her plan could be scaled up.

Luisa was told she was manipulative and stubborn. That she was a game player; none of which she denied. I feel she even attempted to play games between interviews being the only one talking – maybe trying to psych them out? Her plan was part retail, part wholesale selling baking goods to small local companies. The feedback echoed what we had already seen; she was a handful, streetwise, very bright but underneath it a spoilt child. Her plan wasn’t fully formed but viable although Lord Sugar wasn’t going to spend ‘100s of £1000 on hundreds and thousands’.

Leaving us with Jordan; Claude said he had no right to be in the process. He was feeding on someone else’s idea, on someone else’s business. He was a ‘parasite’ and this was the interview that was terminated before it had begun. Why? Because Jordan failed in a basic HR/legal requirement – get your name on the Articles of Association when setting up your company and have a shareholders agreement. He didn’t. He was selling something that wasn’t actually his. That smug smile went in an instant. The panel concluded he wasn’t an entrepreneur rather someone who fed off others ideas. Sad but true. Shame we didn’t know these important facts sooner and someone with a better more credible plan didn’t have a chance to compete for the final instead?

So the outcome? A ruthless Lord Sugar fired Jordan first for selling something that wasn’t his. Followed by a father like ‘disappointed’ firing of Neil who was a great candidate had a job been on offer but the proposition was not so good. That left three ladies – meaning Lord Sugar’s new business partner would be a woman for sure. This process had done more good in the 11 week series for getting a woman in the board room than all the current government policies and directives put together!

So it came down to Francesca not being able to carry through her ideas against Luisa’s risk free cupcake plan, or Leah’s risky cosmetics (although they would make more money that way as Leah was quick to point out!). Francesca walked leaving two very different ladies in the final.

So will feisty, manipulative, spoilt Luisa or cold, professional, super smart Leah get the £250,000 cash? And what do you think of Jordans’ stupid, fool hardy mistake of not having the basic legal business blocks in place? Come share your thoughts and opinions with us at @BizMattersmag or follow us on twitter @3domSolutions