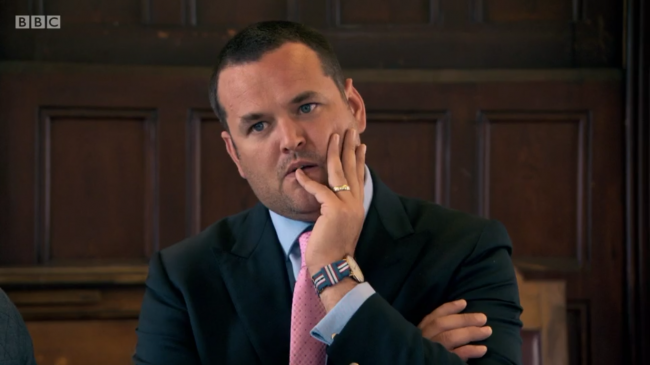 You’d think the candidates would be used to their weekly early morning wake-up call by now, but no, they still act as if they’re not expecting it.

This week, the candidates gathered at Lee Valley Velopark and were given the task of creating a crowdfunding campaign for a new cycling product; making a webpage, video and PR stunt, as well as pitching the product to cycling retailers.

This week Lord Sugar decided to mix things up and possibly throw the trend of Titans’ consecutive wins. After little discussion JD was allocated as project manager for Nebula, whilst a very confident Samuel became project manager for team Titans – which was bound to be interesting.

Choosing the product got the teams off to a good start as the decisions made were fairly neutral with team Nebula opting for safe, yet comfortable headphones and team Titans chose to promote a light up ‘fashionable’ gilet.

As for planning the PR stunts that followed, the initial vibe was very much tainted.

Nebula chose to gain attention to their headphones through a gospel choir singing a reworded version of ‘Joyful Joyful’. Although Frances seemed pretty impressed by her lyrical ideas, the expression on the choir members’ faces couldn’t oppose her enthusiasm any more. Meanwhile, Samuel pitched his rather confusing idea to his team members who’s thoughts were predictable, matching the majority of viewers watching at home: just what was he doing?

As Samuel allowed his ideas to run, or should we say cycle, away with him, JD was pretty much sitting back and letting his other team members do the work. From an outsider’s point of view, it was clear to see there was no form of management within team Nebula. JD may as well had been an addition to the role of Karren and Claude’s – simply watching the task unroll.

Team Nebula began filming their video for the campaign, with Sofiane literally taking the hot-seat – which is never good. As predicted, Sofiane let his rather bossy ways run away with him, telling Jessica who was directing, which shots to do and where to film. Friction began to grow between Sofiane and Paul, who appeared like two bickering brothers, with Jessica taking the mothering role, when trying to make the peace.

The gilet video was looking a lot more professional than the headphones one. Yet, JD was so unaware of the goings on in his team, simply due to his continued laid back approach. “I’m happy to take a step back and just chill out” – like he hadn’t been doing already at the point?!

So, the bickering between Paul and Sofiane continued and Jessica was once again found getting into her mothering role, with a more stern manner this time, which seemed to be more effective.

Before the PR stunt, when watching the video team Titans had created, Trishna had pointed out that ‘gilet’ was spelt wrong – when in fact it wasn’t. However, when she tweeted out and made sure the webpage spelt ‘gilet’ as ‘gillet’ it was Claude who had to pull her up on her mistake – slightly embarrassing, particularly after being so smug in pointing out the ‘mistake’ in the first place.

Next came the pitches where Karthik unsurprisingly took a humorous yet, professional approach, which was rightfully applauded by the retailers he was approaching. Courtney was obviously quite nervous but managed to deliver relevant information, unlike Samuel who ended up standing in for the pitch which Trishna was originally down to do, who would have probably done a better job.

JD lead his team for the pitch, who may have seemed confident but the retailers weren’t buying it – literally. From JD telling already converted cycling retailers that the market is growing to Frances being unexpectedly passed over to talk on pricing, with the slip up on the figures, it was pretty much a disaster which was noted in their return to the boardroom.

Lord Sugar addressed Samuel’s idea for team Titans’ PR stunt as ‘terrible’ and ‘useless’ and I couldn’t have agreed more.

But, although it was a mutual view that Samuel was not the best project manager, team Titans still became victorious for another consecutive week, going off to learn some advanced cooking whilst team Nebula drowned their sorrows drinking tea from ridiculously small polystyrene cups in a typical losing team’s rundown cafe.

As it was outlined by Lord Sugar that Rebecca and Frances had been in the loosing team five times, their positive nature of their fate was beginning to become questionable. However, Frances made a great escape gaining the freedom of not returning to the boardroom as JD picked Paul and Rebecca to join him to face Lord Sugar.

As soon as the three candidates walked in, it was clear that Paul was pretty certain that he shouldn’t have been called upon to return to the dreaded boardroom. With a defensive and convincing reason as to why he had been wrongly brought back, JD finally admitted that it may have been a mistake and that Sofiane should have been in Paul’s place. As well as admitting to this mistake, JD admitted to many more and took it on the chin as he held his hands up to the wrongs he’d been accused of.

Lord Sugar saw that JD’s chilled approach could only take him so far and for a role in project management, this was too much relaxing for his liking and was the latest contestant to be fired.