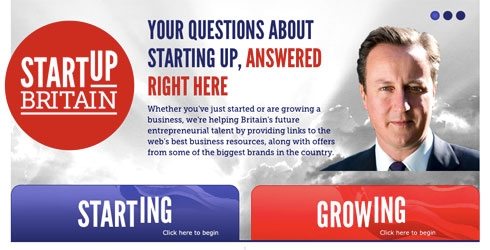 It is fair to say that the level of negative comments being made in social media circles, directly to us at the magazine, and me Paul Jones, Editor, came in a close second to the level of positive comments which has prompted me to look again at this again.

So why? Are the comments founded? What is the problem?

Well, some of the comments are related to the initiative website, www.StartUpBritain.org and front of the campaign. Yes, the website does feature some references and support being provided by American based businesses, like Google.

Ok, not a lot you can do about that, as, for example, there isn’t a UK based version of the worlds leading search engine, which also sells adwords. However, the offer of £30 towards google adwords isn’t the most generous of offers and one that can easily be found in a number of places, which if you were starting a business you should know all about after hours and hours of research.

The biggest issue that I have received messages about today is the ‘create a logo’ tab. This links to the US based company and website 99designs.com, plus David Cameron during his keynote commented (I am paraphrasing) a logo is not crucial.

This has angered designers in the UK. We see their point, as they like those going to the website are independent designers based in Britain.

After the launch I spoke to a few business owners to get their take.

Jackson continued: “A group of entrepreneurs put together this initiative of their own accord. In a matter of weeks it went from concept to launch and they managed to get backing from the PM and high-profile entrepreneurs. Rather than embracing the positives and supporting the project, some people have instead preferred to snipe at it and pick holes in it. Of course it isn’t perfect, but the attitude if this was done in the same way in the US (Startup America is Government conceived and funded) would have been much more positive.”

Jackson, who was at the launch today concluded by saying that “When I’ve questioned some of the naysayers, it’s quickly become apparent that they’ve not looked into the project in any detail and are assuming it’s paid for by their tax money or is being directed by civil servants. That isn’t the case.”

Duane has been in business for a few years now, and started off with assistance from The Princes Trust, so what is it like stating a business today, could someone who has recently done it see Start Up Britain helping them?

I asked Hayley Chalmers, MD of Short Couture and member of the Forum of Private Business, who said: “I have spent almost 2 years setting up my business – which I launched last week. I did it with my own savings and not a single penny of government money – because there was none. If one is over 30, not a green biz, or tech or social enterprise – there are no grants.”

Chalmers added: ‘I couldn’t find any deals anywhere – which surprised me. I managed to negotiate a couple of small savings myself but nothing significant. Mostly this was with small firms that took pity on my situation.  The big firms were not interested and had no provision for deals.  I had the idea to set up a startup deals site – but mine was going to allow any firm that created a good deal, to take part. I would have been looking for better than ‘pretend’ deals. The 10% and things they give to everyone stuff.’

Chalmers concluded: ‘So now I’m struggling to get the business going, to get the word out there. And I see nothing on Start Up Britain that will help me – or really would have helped me.’
Hayley is right, and so is Duane, I could now dissect every aspect of the Start up Britain website and offering, wonder why Business Matters has been missed out, as we would love to be involved, However, I’m not.

The entire team of the eight entrepreneurs behind Start-up Britain who are doing this themselves with no financial support from government deserve praise and where you think they have made a mistake actual go to them and suggest an different way of doing something, telling them ‘that bits rubbish’ isn’t that helpful.

Remember that first day in your business? Is your business the same now? I doubt it and it probably evolves constantly. Earlier today Duncan Bannatyne said “you need a thick skin to be in business”

The founders of Start Up Britain found that out first hand today, but we shouldn’t be lambasting them, but acting as informed but critical friends and helping make the British business community stronger.

Start up Britain has Business Matters 100 per cent support and it should have yours too, give them time to grow. In three months if you don’t like it, then you can say ‘I told you so”