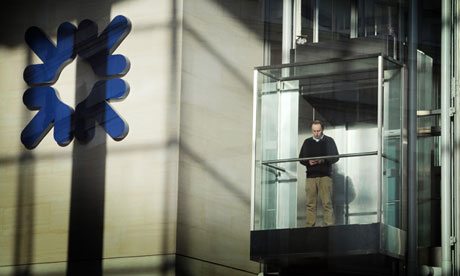 Economic forecasting is a mug’s game. Experts find it next to impossible to predict the next set of quarterly growth figures or the length of the dole queues in the latest month, reports The Guardian.

Most forecasts are made by extrapolating recent trends and tweaking them a bit, which is why they tend to be wrong when economies are subjected to powerful shocks. Last week, the Paris-based Organisation for Economic Cooperation and Development bravely tried to envisage what the world will look like in 2062. But, as the UK’s recent experience shows, even imagining how things will pan out in 2013 is hard enough.

This time five years ago, the economy was still growing and Gordon Brown contemplated holding a snap general election, before eventually getting cold feet. The Royal Bank of Scotland had just bought ABN Amro in the biggest bank takeover in history. The official cost of borrowing set by the Bank of England was 5.75%. Only economic geeks had heard of quantitative easing.

It would have taken a brave forecaster to say back then that in late 2012 RBS would be largely owned by the British taxpayer, that interest rates would have been at 0.5% for the best part of four years and that the Bank would be sitting on £375bn of gilts bought from the private sector in an attempt to get the economy moving after a deep recession.

It was assumed at the time that all these measures were temporary expedients to deal with what was expected to be a short-lived crisis. Yet there is no immediate likelihood of RBS returning to the private sector, the City thinks that interest rates will remain at 0.5% until at least 2014 and the Bank will not start selling the gilts it bought under the quantitative easing programme until the economy can cope with dearer borrowing.

These forecasts could also prove to be wide of the mark. Although it currently looks unlikely, there is a possibility that all the stimulants pumped into the economy since late 2008 will finally work and that activity will accelerate rapidly. David Cameron may be right when he says that the good news will keep on coming.

In truth, nobody knows what is going to happen over short periods of time, let alone decades. Let’s take the UK as an example. The economy’s performance since the slump of 2008-09 has broken with recent historical precedent, with recovery much slower than was the case after the downturns of the early 1980s and early 1990s. The first quarter of 2013 will be the fifth anniversary of the pre-recession peak in UK output and the economy will still be around 3% smaller than it was in the first quarter of 2008. In 1986, five years after the trough of the recession of the early 1980s recession, the UK was humming. The pattern repeated itself in the 1990s.

It’s tempting to say that the problems of the economy are the fault of the government, either the current one for being too austere or the previous one for being too spendthrift. Tempting but wrong. Something more profound has been going on.

As Dhaval Joshi of BCA Research noted last week, the UK has been the fastest-growing major economy in Europe over the past decade, even after its double-dip recession. The reason for that, though, was simple: Britain went on a borrowing binge.

At the start of the 1990s, the UK’s combined private and public sector debt amounted to 165% of GDP. By 2000, this had climbed to 200% of GDP. Over the next decade it rocketed to 295% of GDP. It was this acceleration in the rate of growth of indebtedness, Joshi says, that provided the strong tailwind for the economy in the years before the financial crisis.

The problem, he adds, is that last decade’s tailwind has become this decade’s headwind. To receive the same boost from credit again, the UK’s debt-to-GDP ratio would need to accelerate again over the next decade, to 450% of GDP. That looks utterly implausible since the private sector is debt-sated and the government is aiming to cut its borrowing.

Seen in this light, the recent performance of the economy looks a lot more comprehensible. Deprived of the impulse it got from credit, the UK’s growth rate has fallen. There is nothing abnormal about quarter after quarter of virtual stagnation; the abnormal period was the pseudo-Ponzi scheme that went before.

Yet the Joshi analysis should be cause for sober reflection rather than deep depression. Let’s try out a few assumptions. The first is that a return to the pre-2007 business as usual model is both desirable and possible; this is fast becoming a minority view, although it does have its adherents.

The second assumption is that a stagnant economy is indeed the new normal but that we should welcome it as it will prevent us from burning up the planet. Greens would argue that Britain could thrive and be happy in a steady-state world provided work, income, wealth, and opportunity were shared more equitably.

The third assumption is that a new growth model will emerge from the wreckage of the old. Historically, this is the most likely scenario and it has often been periods of crisis in the past that have provided the catalyst for change. For example, the 1920s were a troubled decade for Britain with low growth, high unemployment and industrial unrest. Yet in the two decades after the end of the first world war there was a gradual shift in the economy away from the staple industries of cotton, coal and shipbuilding towards light engineering. Then, as now, the world was being changed by technology. Then, as now, the global balance of power was changing.

The crisis has been so powerful and so long-lasting it is easy to believe that the economy is like frozen Narnia under the White Witch. But humans are ingenious and adaptive: a thaw will eventually set in.

On past form, this structural transformation will take time and patience will be needed, particularly given Britain’s misshapen economy. It will be driven primarily by the private sector, although government has the capacity to help or hinder the process. Decisions taken on skills, education, welfare, infrastructure, public procurement, industrial strategy and banking will be crucial in this process and will matter far more than whether George Osborne tweaks fiscal policy in his pre-budget report next month.

The PBR is unlikely to be a bundle of laughs. The chancellor is going to have to admit that growth is weaker and borrowing higher than he had hoped. But it would be unwise and needlessly gloomy to assume Britain in 2022 or 2032 will still be today’s recession-mired basket case.