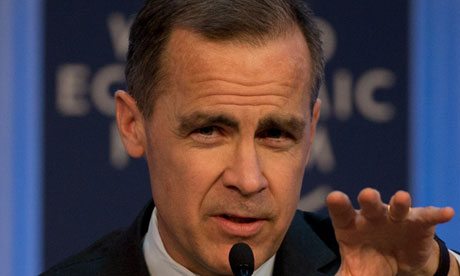 The man hand-picked by George Osborne to run the Bank of England has fuelled speculation that he will order a policy revolution to jump-start the stalled British economy as fears grow of a triple-dip recession, reports The Guardian.

Speaking at the World Economic Forum in Davos, the Canadian Mark Carney, who will take over from Sir Mervyn King in July, hinted strongly at a new approach when he said that central bankers should be prepared to take aggressive measures to help economies achieve what he called “escape velocity”. “There remains considerable flexibility – which includes the use of communications, which includes the use of unconventional measures,” he said.

In the US, the Federal Reserve recently made a public pledge to keep stimulating the economy by printing money until the unemployment rate falls to 6.5% – an approach rejected by the outgoing King.

While UK interest rates have been at a record low of 0.5% for almost four years, and the Bank has already pumped £375bn into the economy, Carney insisted central banks’ policy options were still far from exhausted.

Carney’s reputation has soared during his time as governor of the Bank of Canada – one of the biggest world economies to have escaped the global crash without suffering the fallout endured by countries such as the UK.

Although he was speaking generally rather than singling out the UK, Carney’s comments will nonetheless be seen as evidence that he is preparing a substantial change of direction when he takes up his new post.

Suggesting that he might act quickly – perhaps with a pledge to hold interest rates low for a prolonged period – he said: “Monetary policy can be more nimble than fiscal policy.”

Some economists, frustrated by the slow pace of recovery and what they regard as the conservatism of King, have recently called for more radical action from the Bank, such as direct lending to small businesses.

Osborne, who was in Davos when Friday’s grim GDP figures were announced, has come under mounting pressure to moderate his deficit-cutting plans, to ease the pressure on the flatlining economy.

Business secretary Vince Cable is also leading calls within the coalition for action to increase spending on infrastructure, to help kickstart the economy into life. Deputy prime minister Nick Clegg has already suggested the government may have been wrong to slash capital projects so quickly after coming to office in 2010.

Jim O’Neill, chairman of Goldman Sachs Asset Management, added his voice to the chorus of criticism, telling the BBC: “Based on my business experience, if what you thought was not delivering what you expect to be the outcome, surely you have to change what you thought a little. At a minimum, a repositioning of the stance, if not a full change.”

Meanwhile, some business leaders expressed concern that David Cameron’s pledge to call on an in-out referendum on EU membership might further harm the economy.

Sir Andrew Cahn, former chief executive of UK Trade and Investment, and now vice-chairman of the Japanese bank Nomura, said in Davos that he believed there was already “a chill” in the attitudes of some investors towards Britain.

A Nissan spokesman at the carmaker’s headquarters in Yokohama said: “We’re a global company and Europe is a vital part of our volume, so we’d like to ensure that our business can operate in Europe as freely as possible.

“We’ve invested £3.5bn in the UK since our Sunderland plant opened in 1986. It’s a highly successful plant and 80% of volume from there is exported [mostly to continental Europe]. We would welcome policy decisions that continue to support that success.”