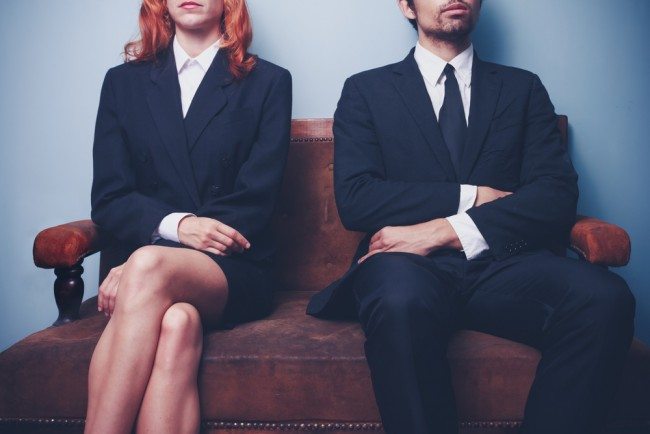 Women are still being forced to wear high heels, make-up and revealing clothes by some employers, a parliamentary report has found.

The report published on Wednesday  by two parliamentary committees, for Petitions and for Women and Equalities, claims current laws to prevent discrimination are not “fully effective” reports the Independent.

It was launched following the experience of Nicola Thorp, a receptionist at PwC, who was sent home without pay for not wearing high heels.

Ms Thorpe launched a petition that received more than 150,000 signatures and triggered an inquiry by the Women and Equalities Committee.

Ann Franke, chief executive officer of the Chartered Management Institute, told the BBC that employers are not supposed to discriminate in terms of dress codes based on gender.

She said: “A dress code can say that you have to be customer appropriate, so you have to be neat, you may have to wear a certain colour […] those things are fine.

The report may have been launched over a pair of shoes but it has revealed a lot about sexism in the workplace.

Here are five things you need to know as an employee and employer:

Employees do not feel able to challenge dress codes

When Ms Thorp challenged her employer’s dress code, she was laughed at by her manager and sent home without pay.

The investigation found that her experience echoes that of many women.

Emma Birkett, a female employee cited in the report, said that after questioning the dress code required by her employer, she was laughed at and met with a “quip” that she would have plenty of time to rest her feet if she were unemployed.

She was only allowed to wear flat shoes to work after an ankle sprain. Although Ms Birkett was aware that there were organisations she could have turned to for support, she did not contact them.

She said: “There is always that fear that if you do that, you will be pushed out of your job. When you really need that employment, you have to weigh up how much fuss you think it is worth financially to you.”

The existence of a health and safety risk

The Committees received written evidence from the College of Podiatry.

The College said that women who wore high heels for long periods of time had reduced balance, reduced ankle flexion and weaker muscle power in the calf.

This significantly alters the mobility of the foot and puts the wearer at a much greater risk of associated disabling pathologies over a long period of time.

Footwear is clearly documented in scientific literature as being a primary cause of foot pain and pathology with a direct link between women who wear ill-fitting footwear and disabling pain.

Employees feel sexualised by their employers

Requirements to wear makeup, short skirts or even dye their hair blonde made some workers feel sexualised by their employer and deterred their career progress, MPs found.

The Fawcett Society, the UK’s leading charity promoting gender equality and women’s rights at work, at home and in public life, told the inquiry that requiring women to abide by gendered dress codes, often of a sexualised nature, sent out the message that their appearance was of more value than their skills, experience or voices.

“There have been statements from women expressing that being asked to look “sexy” in the workplace leads to the uncomfortable realisation that the business they work for is profiting from their bodies,” said the campaign group.

The Equality Act is not adequately protecting workers

The Government said that the dress code imposed on Nicola Thorp was unlawful- but requirements to wear high heels remain widespread.

It is clear that the Equality Act 2010 is not yet “fully effective in protecting workers from discrimination,” the report concluded.

The report recommends that a publicity campaign be launched to ensure that employers know their legal obligations, and that workers know how they can complain effectively.

It suggests that guilty employers should be required to pay compensation to every worker affected by their discriminatory rules.