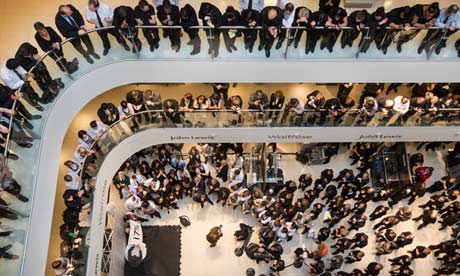 The John Lewis retail chain has handed its 84,700 staff an annual bonus worth 17% of their salary – the equivalent of nine weeks’ pay – as the employee-owned company continues to outperform its rivals, reports The Guardian.

Staff at John Lewis’s Oxford Street store whooped and clapped as the better-than-expected bonus – which is handed to all employees, from cashiers to chairman Charlie Mayfield – was revealed on Thursday against a gloomy backdrop for some other retailers. The bonus for an employee on average salary would be £4,000.

But the John Lewis Partnership warned it was reviewing its pension, one of the few non-contributory final-salary schemes left in the country. It said: “During the next year the partnership will be undertaking a review of the pension scheme to ensure that it can remain fair to partners and sustainable from a business perspective.”

The latest burst of growth brings the partnership within a whisker of Marks & Spencer’s UK sales of £8.9bn for the year to March 2012. A big part of that growth came online, with sales up 40.8% at Johnlewis.com. Waitrose’s online business rose 49%, compared with 19% for the grocery market as a whole. Both the group’s chains have gained market share over the year.

Natalie Jempeji, section manager in lingerie at John Lewis Oxford Street, said: “It’s a bit more than I was expecting so I’m happy with that. I’m going to spend the money on a holiday to Turkey for my birthday later in the year.”

George Young, section manager of furnishing fabrics, who has been in the partnership for 45 years and helped open the outsized envelope containing the bonus figure, said: “This is the last bonus before I retire. I’m going to take my wife to Cornwall to enjoy a nice holiday that will set me up for retirement.”

The company said it had reaped the benefit from its investment in technology and lower prices, as well as shoppers’ trust in its brands during the horsemeat scandal and tough times on the high street that have seen the demise of rivals.

Mayfield, whose most recently disclosed salary was £825,000, said: “These results have been achieved against a market that remains subdued, but we believe the market is stabilising and there are some opportunities out there.”

The chairman added that the outlook for the economy was becoming clearer as fears about the collapse of the eurozone subsided.

This year, John Lewis will be investing over £200m, more than ever before, in store refurbishments, a new warehouse and future stores, although no new outlets will open this year.

Waitrose, meanwhile, is planning to open 20 stores this year and a new distribution centre in Lancashire to support growth in the north of England and Scotland.

The two sides of the partnership will also be looking at more ways to work closer together after launching a service that allows shoppers to pick up goods ordered at Johnlewis.com at Waitrose stores.

Andrew Murphy, director of retail operations, said the group would be opening another Waitrose inside a John Lewis, as it has done in Oxford Street and Bluewater, and was looking for at least two more sites where John Lewis and Waitrose could open neighbouring stores.

In Ipswich, where such co-location is already operating, sales are running 30% above expectations four months after the stores opened.

Neil Saunders, managing director of retail analyst Conlumino, said: “One of the most impressive features of John Lewis over the past year has been its ability to keep many plates spinning simultaneously. The pace and quality of innovation and initiatives has been extremely strong and is one of the central reasons for its outperformance.”

A 29% surge in sales of electrical goods such as iPads and TVs boosted sales at John Lewis last year as major high street rival Comet collapsed. Waitrose saw its market share rise from 4.7% to 4.9% after it opened 19 new stores and promised to match Tesco’s prices on branded goods and expanded its Essential range of low-price basic foods.

Mark Price, managing director of Waitrose, said the chain’s prices were now on average 1% cheaper than Sainsbury’s. He said the Little Waitrose convenience store chain made a profit for the first time in 2012, its third year in existence, and he plans to open at least 10 more of the small shops this year.

Both Waitrose and John Lewis experienced a gradual rise in the pace of growth over the year and that momentum has continued in 2013.

Gross sales rose 10.5% in the first five weeks of the year, with like-for likes sales up 13.7% at the department stores and 6.4% at the supermarket compared with the same period in 2012.