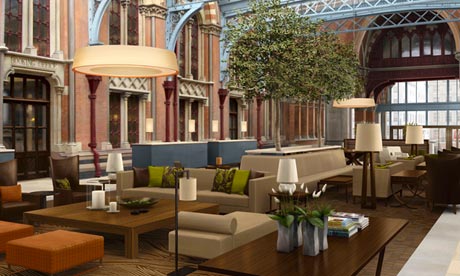 Booming trade in Britain’s hotels and restaurants is paving the way towards an economic recovery, according to the business lobby group the CBI.

Its quarterly survey showed that hotels, bars and restaurants enjoyed their biggest rise in trade in almost six years. That boosted business confidence and the entire services sector – which also includes accountancy, legal and marketing firms – expects solid growth in activity and profitability in the coming quarter, reports The Guardian.

A resurgence in the wider services sector, which accounts for more than three quarters of the economy, helped Britain avoid a triple-dip recession at the beginning of the year.

The survey will provide some respite for the chancellor, George Osborne, who was last week urged by the International Monetary Fund to rethink his plans for a £10bn tax-and-spending squeeze this year, as part of a broad-based attack on the coalition’s economic policies.

It is the latest in a series of cheering economic indicators for Britain. This month the Bank of England raised its growth forecast and trimmed its inflation forecast, the first time it had done so since 2007, prompting outgoing governor Sir Mervyn King to say that “recovery is in sight”.

A rise in consumer spending in the three months to May boosted profitability for the first time since November 2007, despite growing employee costs. Stephen Gifford, CBI director of economics, said: “What’s promising is that consumer services have seen growth in activity, and expect this to continue pointing to a greater willingness from people to go out and spend.”

Activity in the business and professional services sector was broadly flat over the quarter and profitability fell. But the companies surveyed had brighter expectations for the next quarter and optimism rose at its fastest rate in more than three years.

The CBI warned that the business climate remained difficult. Gifford said: “There is concern around getting access to finance, so it’s vital that growing firms look at the full range of funding options out there on the market. Conditions remain tricky, with consumers still grappling with a squeeze on real incomes, and business confidence vulnerable to any adverse developments in the global economy.”