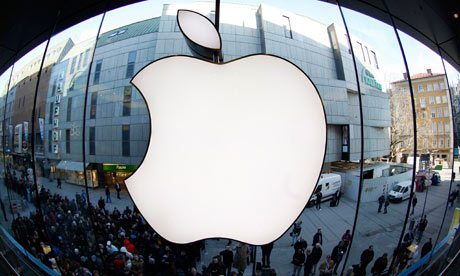 The prospect of a sudden halt in growth, after earnings leapt 23 per cent in the year to September 2012, weighed heavily on Apple’s shares. They sank to a fresh 12-month low, falling 5.5 per cent to $402.80, after briefly dipping below $400 for the first time since 2011, reports The FT.

They are down more than 40 per cent since September’s peak of $702.10. The latest decline came as investors weighed up reports suggesting Apple’s new product shipments were slowing.
Cirrus Logic, a maker of audio chips for the iPhone, late on Tuesday reported lower than expected quarterly results and weaker than forecast sales guidance. Its shares tumbled 15.7 per cent on Wednesday, spooking Apple investors already fretting about the outlook.

Apple watchers had predicted a launch of an updated iPad in March or April but no such event has been announced. Despite reports from the Asian supply chain that Apple is gearing up for a June launch of a new iPhone, some Wall Street analysts believe its flagship device may not be updated until September, leaving a fallow period of sales for much of the first half of 2013.

In addition, Tim Cook, Apple chief executive, is yet to make a decision on whether to increase cash returns to shareholders, after promising to consider a push for greater payouts from activist investors. Analysts have speculated that an increased dividend or share buyback programme will be announced alongside next week’s earnings.

Apple could raise new debt to fund the dividend in order to preserve its US cash, and possibly commit to pay a portion of free cash flow directly to shareholders. Although Apple had more than $137bn in cash at the end of 2012, more than two-thirds is held overseas and would incur heavy taxes if repatriated.

“The broader concern that is putting downward pressure on Apple shares is that there are growing expectations for a weaker-than-expected June quarter,” said Colin Gillis, analyst at BGC Partners. “The downside of the product refresh cycle is that consumers have been trained to wait for the new products and delay their purchases.”

Other analysts have cut their forecasts in recent days. Gene Munster of Piper Jaffray, one of the more bullish Apple watchers on Wall Street, said a new cheaper iPhone could eat into sales of its full-priced stablemate.

Apple also faces fresh criticism in China, despite a grovelling apology over its after-sales service last month. It was among nearly 200 providers of online content ordered by Chinese authorities to remove pornographic or obscene materials that it hosted.

The App Store, the primary source of content for the iPhone and iPad, is already policed heavily by Apple to prevent explicit material appearing, and the California-based company has previously co-operated with demands from Chinese censors to remove apps that could breach the country’s tight media controls.