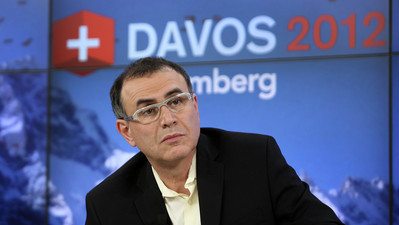 Persistent economic weakness is sapping the ability of governments to tackle the growing threat of climate change and risks a global “perfect storm” of intertwined financial and ecological collapse, the World Economic Forum has warned.

In the runup to its annual meeting in Davos this month, the WEF used its annual Global Risks report to urge policy leaders to step up their efforts to tackle the three big dangers cited by a panel of 1,000 experts: severe income disparities, the indebted state of governments and rising greenhouse gas emissions, reports The Guardian.

The report showed that for the second year running, the widening income gap, chronic fiscal imbalances and greenhouse gas emissions were seen as the three most likely threats to emerge over the coming decade. Of those risks deemed likely to have the biggest impact on the global community, a major systemic financial failure and a water supply crisis were again deemed to be the most serious, followed by chronic fiscal imbalances, food shortage crises and the spread of weapons of mass destruction.

Howell said the fact that the key risks in 2013 were the same as they had been in 2012 reflected a sense that policymakers were failing to get to grips with the threats. “There is a feeling that we are not making progress”, he said at the launch of the report in London. “We are not seeing the state leadership necessary to tackle these risks.”

While praising the attempts by countries such as Switzerland, Singapore, Australia and China to improve their resilience, the WEF said the immediate challenge of coping with economic problems was making governments reluctant to address the long-term threat of climate change.

“Continued stress on the global economic system is positioned to absorb the attention of leaders for the foreseeable future”, the report said. “Meanwhile, the Earth’s environmental system is simultaneously coming under increasing stress. Future simultaneous shocks to both systems could trigger the ‘perfect global storm’ with potentially insurmountable consequences.

“On the economic front, global resilience is being tested by bold monetary and austere by bold monetary and austere fiscal policies. On the environmental front, the Earth’s resilience is being tested by rising global temperatures and extreme weather events that are likely to become more frequent and severe. A sudden and massive collapse on one front is certain to doom the other’s chances of developing and effective, long-term solution.”

Each year, the WEF asks its panel of experts to compile a list of the 50 key risks. The 2013 study showed how views had changed since the start of the global financial crisis in mid 2007. At the start of that year, the five risks most frequently cited were a breakdown of critical information infrastructure, chronic disease in developed countries, an oil price shock, a hard landing in China and an asset price collapse. The five risks deemed likely to have the biggest impact were an: asset price collapse, retrenchment from globalisation, interstate and civil wars, pandemics and an oil price shock.

The report cited two other causes for global concern: a false sense of security over health and digital wildfires.

“Huge strides forward in health have left the world dangerously complacent. Rising resistance to antibiotics could push overburdened health systems to the brink, while a hyperconnected world allows pandemics to spread,” the WEF said.

It added that the internet could be the source of global panic. “Social media allows information to spread around the world at breakneck speed in an open system where norms and rules are starting to emerge but have not yet been defined. While the benefits of our hyperconnected communication systems are undisputed, they could potentially enable the viral spread of information that is intentionally or unintentionally misleading or provocative.”