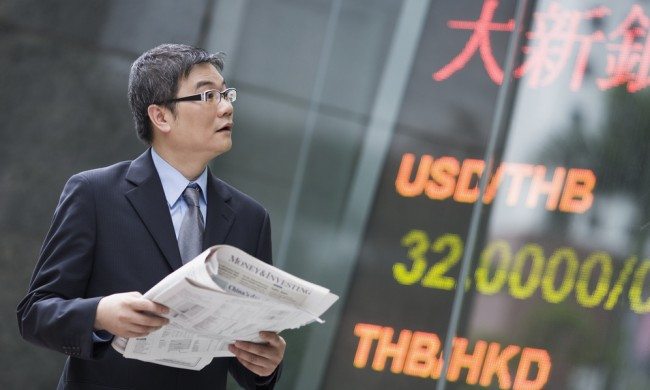 Shortly before closing, the mainland’s benchmark Shanghai Composite was down 1.1 per cent at 2,929.17, after veering in and out of negative territory.

The BBC reports that it had fallen by about 16 per cent this week, rocking global markets.

On Tuesday, China’s central bank cut its key lending rate by 0.25 percentage points to 4.6 per cent in a bid to calm stock markets after the past days’ turmoil.

The dramatic losses and volatility in China have shattered investor confidence and led to sharp falls in Asia and the US over the past days.

The interest rate cut was the fifth by the People’s Bank of China since November last year.

A rate cut will make it cheaper for banks to borrow from the central bank and will in turn make it easier for businesses and private people to borrow money from those banks.

The BBC’s Celia Hatton in Beijing explains that the move is aimed at a long-term effect on the growth of the Chinese economy, rather than at having an immediate impact on investors.

“They’ve already said they are not going to intervene on a day-to-day basis in the stock market, but they are going to focus their attention on growing the real economy in the long term.”

Hong Kong’s Hang Seng index followed Shanghai’s lead for most of the morning but then traded flat at 21,416.09 points.

The deeper problem is that now the year-long stock bubble has burst, investors are confronting the economic fundamentals.

China has embarked on a huge transition away from its previous investment-led growth model, and although the government warned that transition would be painful, the pain is already far worse than it bargained for, undermining the credibility of its 7 per cent growth target and deepening political unease.

A dramatic devaluation of the currency a fortnight ago, coming on top of the summer’s bungled stock market rescue, has left Beijing looking uncertain and accident prone.

The stock market may well have further to fall.

Given China’s central role in world trade, a slowdown in the world’s second-largest economy would be likely to reverberate around the globe.

The Nikkei’s gains come after a painful week for the Tokyo index, which had shed more than 8 per cent in the past two sessions.

Overnight, European and US markets saw another session of volatile trading.

Wall Street’s Dow Jones closed 1.3 per cent down, marking the sixth consecutive day of falls for US stocks.

Major markets in France and Germany both gained more than 4 per cent.