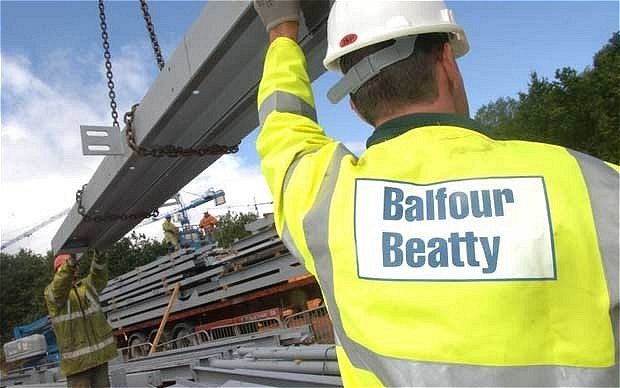 The owner of a construction company is sacrificing £5m – more than 40pc of his turnover – by refusing to work with Balfour Beatty in protest at payment policies which he claims risk putting suppliers “out of business”.

Steve Sutherland, chairman of glazing contractor Dortech, is ending a 13-year relationship with the construction giant because of what he claims are constant difficulties in getting paid for completed work, reports The Telegraph.

Mr Sutherland said his decision will mean losing £5m of Dortech’s turnover, which stood at £12m last year. “We’ve done 80 projects for them so this hurts us a lot. I’d love to work for them again but we just can’t take the risk.”

Balfour Beatty’s approach to payment has caused Dortech severe cash flow problems and resulted in the company making a loss on a series of recent projects, he claims.

In some cases, the company has had to wait more than 200 days for bills to be settled, he said, and “unfair” discounts imposed retrospectively by Balfour Beatty have meant he often ends up losing money. The 20 year-old business has had more than £100,000 “withheld” on recent projects, he claims.

Mr Sutherland noted that the issue is not isolated to Balfour Beatty, but said he wanted to identify them because suppliers are often afraid of “naming and shaming” companies with poor payment practices. “They exploit their financial clout. It’s not illegal, but morally, ethically? I have my view. I don’t think elephants worry about stepping on ants.”

Mr Sutherland’s issue involves so-called “withholding notices” that construction contractors issue, ostensibly where there is a disagreement over the valuation of work.

Rather than simply submitting an invoice, suppliers “apply to be paid”. Subcontractors complain that this process is often used as a way of reducing the value of bills regardless of the quality or pricing of work.
“The whole process is used as an excuse to avoid paying, drive the cost of the project down and improve their cash-flow. Do they care about the unintended consequences, which is the risk of putting people out of business?” Mr Sutherland said.

“We phoned and emailed one project director more than 30 times with no response. No one will talk to you so you keep working and investing, you get to the end of the project and they want to withhold thousands [of pounds]. We haven’t made a profit on any project with them for some time.”
He said he believes that the management of Balfour Beatty, which has sales of more than £11bn, is “well intentioned” but warned pressure on project managers to cut costs is having dire “unintended consequences”.

“They’re under so much pressure to save money, they’ll do anything to save their jobs. The unintended consequence is small companies going out of business, or just not investing – we certainly can’t afford to invest.”
A recent survey of 250 small construction companies found that 97pc feel unfairly treated by main contractors.

A spokesman for Balfour Beatty said the company “is committed to its supply chain and is at the forefront of Government and industry initiatives supporting the well-being of our suppliers”.

“Balfour Beatty has had a long standing valued relationship with Dortech, spanning many projects. The [most recent] contracts were completed in August with the last of these accounts agreed early in November.