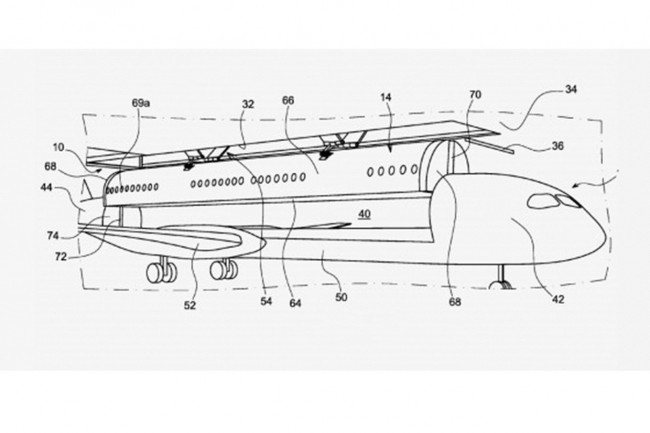 In a patent granted earlier this week, Airbus detailed a method that essentially turns a plane into a truck. Instead of featuring a single hull, as traditional planes do, the plane would have a hole in the middle. Passengers wouldn’t board the plane itself, but instead would be loaded into a separate “cabin module” in the departure lounge. This module would then be dropped into the hole, reports WIRED.

According to Airbus, the design would significantly “reduce the immobilisation time of the aircraft and terminal” — so it’s a time-saving method. Instead of waiting in a departure lounge for your plane to be disembarked and cleaned, and for luggage to be unloaded, passengers, and their luggage, would instead take their place in the loading cabin instantly.

Waiting is not only an irritating aspect of a travelling experience, but also costs airlines money — in the US, airlines make a profit of just $8.27 per passenger. Airbus say that their loading design would save precious time — and therefore boost profit. Extra flights per day could potentially make airline companies millions.

It’s not the first time Airbus has patented an idea like this, or gained headlines for their efforts; they recently designed ‘mezzanine’ seating that would see passengers stacked on top of each other in a Hieronymus Bosch-meets-Tetris arrangement. They’ve also designed a number of slightly less terrifying concepts — a VR helmet to help you forget you’re flying and a ‘smart baggage’ system to make sure your luggage never goes astray are both examples of Airbus’ dedication to innovating the airline industry.

Unfortunately for those already sold on the detachable cabin idea, it’s unlikely to be made reality any time soon. Enforcing the change would involve a complete overhaul of airport infrastructure, with departure lounges and airport architecture needing to be updated or completely changed in order to accommodate the new planes.