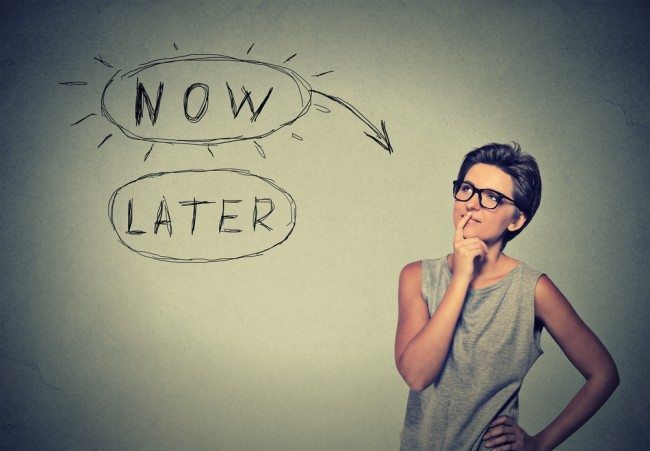 New research from Stockholm University has confirmed that procrastination isn’t just a time-management issue, says inc. In this study, researchers found that emotional reasons are often a trigger for procrastination, and some people claim they purposely leave things to the last minute because they work better under stress, but that only feeds into their stress.

What we think has a profound effect on what we do–even whether or not we put things off. Negative emotions are caused by negative thoughts that derail your ability to get things done, because faced with the thing you should do (clean the garage, write the proposal, apply for the job), you are so daunted or intimidated or tired that you’ll revert instead to tasks that you want to do–the feel-good activities (check Facebook, watch TV, lie down)–assuming you’ll feel better later to tackle the hard thing. Except this doesn’t happen. You feel worse after having put it off!

Here’s how to start redirecting your energy from mood-fixing, goal-derailing activities and get yourself back on track.

1. Get to the Root Cause
First, you have to understand and identify what you’re trying to do and what is holding you back. What feelings crop up when you attempt to write the proposal or have a difficult conversation? What do you fear could happen if you actually do it? What’s the worst-case scenario? For many, if not most, anxiety is to blame. The anxiety of botching the job or not getting it done leads us to put it off until, ironically, we can’t get it done well or done at all.

2. Reward Instead of Avoid
If your mood plummets at the prospect of taking action, your tendency, as Carleton University psychology professor Timothy Pychyl says in a recent Wall Street Journal article, is to heal your mood first. This is how you end up in the Facebook vortex. Instead, tell yourself that doing something, anything, will yield a reward–later. Think of it as procrastinating the fun stuff.

3. Watch for Icebergs
You have a whole bunch of ideas about how the world works and should work that have gradually formed in your head, beginning when you were very young–but you’re barely aware of them, since they’re sunk below the surface of your consciousness. We call them iceberg beliefs, and they can be a problem, because you’re likely unaware of how they’re affecting your thinking. One example of an iceberg belief at play with procrastination is, “I should get everything perfect” (sound familiar?). This need to have things a certain way before you take any action will stunt your progress and keep you stuck. How do you know you’re dealing with an iceberg? The signs include words like “I should” or “I must” zipping through your mind.

4. Change Your Thinking
The way you perceive a situation will determine how you respond to it–and ultimately, what you do. What happens to many of us is that we get stuck in thinking traps, or ways of thinking that leave us no way out or forward.

If you think, “This project is too hard, I’ll never get it done,” you may be a magnifier and minimizer, making the more challenging aspects of a job way worse while minimizing the benefits, both of which kill your motivation. Instead, say, “This is a challenge but it’s doable, and the rewards of even getting started are well worth it.”

If you think, “I could never do this on my own,” or, “I’m just never good at this kind of thing,” you’re likely a personaliser or over-generaliser, which points to low self-esteem. Because you don’t believe you are capable of doing it, and you tell yourself that, well, you believe it, and your fear becomes your reality. Instead, say, “What I’m attempting to do wouldn’t be easy for anyone. Who better than me to take it on? Who else but me is even willing to take it on?”

If you think, “Nothing ever works out for me,” or “I don’t have what it takes to get this done,” then you have a self-defeating explanatory style. You see situations as unchangeable, and if you believe that, well, you can see why you wouldn’t bother attempting to do anything. Instead, say, “Every project, no matter how big, has a beginning, and this is it.” Find one part of the project you know you’re good at and start there.

5. Reframe It
The pain of doing a tough thing now pales in comparison to the pain of regret later if you didn’t even try. Ask yourself, what do you stand to lose by not doing it? How will your life, your career, your relationships suffer as a result of inaction? Remind yourself that it’s not just about how hard this or that task is–it’s about putting real effort into a thing you care about. And I promise you, there’s no better reward than that.

So next time you find yourself putting off a major task, find the root of the problem, shift your thinking, and reframe the obstacle. You’ll find yourself checking things off your to-do list, and enjoying down time much more.