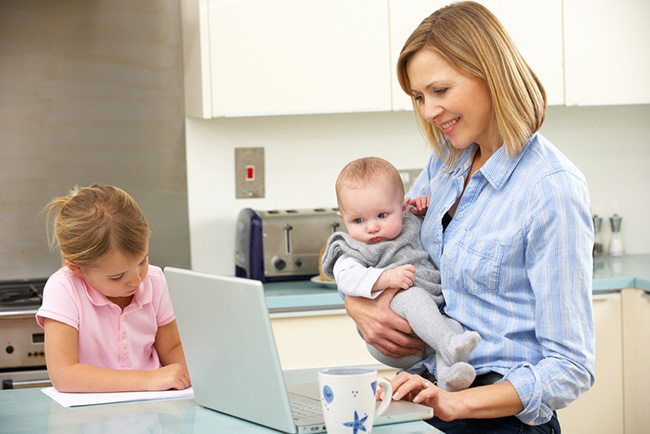 The new breed of businesswomen, dubbed the ‘Returners’, has contributed to an increase in the proportion of SMEs run by women from 14 per cent in 2008 to 20 per cent today.

The number of women over the age of 30 seeking start-up finance and mentoring soared by a third in 2014, according to Startup Direct, which offers Government-backed loans to new firms.

In 2013, women over 30 made up just 25 per cent of general enquiries to Startup Direct, but this grew to 57 per cent last year.

Startup Direct says the increase is largely driven by ‘Returners’ – women who have taken a break from work to have a family and been motivated to start their own business by the challenges of finding flexible employment that is paid well enough to cover the cost of childcare.

The Family and Childcare Trust says a part-time nursery place for 25 hours a week costs more than £6,000 per year. In many places in the UK it costs far more than that.

It was after her second son Benjamin was born with a heart defect that she decided she needed to find a way of working that would allow her to spend more time with her family.

West, who took up an opportunity to run a Baby Sensory franchise, borrowed £15,000 in two loans from Startup Direct and launched her first baby development classes in January. She now runs 11 classes per week.

She said: ‘When Benjamin was born with a complex heart condition and had open heart surgery at six days old that was the nail in the coffin for corporate life.

‘A lady running Baby Sensory classes let me know they were looking for someone to run classes. I ended up taking on the franchise.

‘I run development classes for babies to learn sign language, messy play, light activities and exploratory play and it is sociable for the mums. It is a lovely work environment.’

West said she runs the venture via her phone and takes card payments through PayPal’s app. She uses Hootsuite to manage social media and PeoplePerHour when she needs help with admin or promotions.

James Pattison, chief executive of Startup Direct, said: ‘A growing number of women are disillusioned by the difficulties of combining family life with a traditional nine-to-five job, not least the inflexible hours, lack of well-paid part-time work and the cost of childcare, which continues to spiral.

‘The internet has made it easier than ever to start up a business from home and women are drawn to the prospect of being their own boss, choosing their hours and cutting childcare bills by working flexibly around family life.’

But John Allan, national chairman of the Federation of Small Businesses, said: ‘Failure to provide enough support for women entrepreneurs is a missed opportunity for the economy.

‘We would like to see a lot more evidence gathered on what is holding women back and how we can break down these barriers.

‘Business support should be much more effectively targeted at women. There are still unhelpful stereotypes that suggest small business is a man’s world and these need to be addressed.’