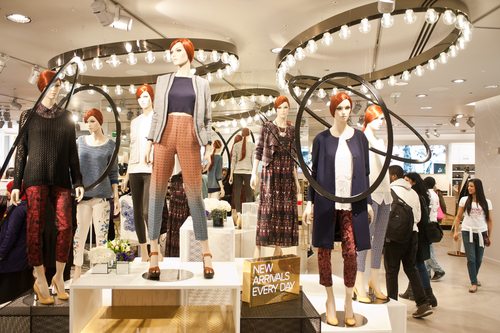 The high street bounced back to sales growth in May as offers and discounts tempted shoppers into stores, according to figures from the British Retail Consortium.

Like-for-like sales were up 1.8% on the same period in 2012, with online spending helping businesses to shift stock left over during a slump the month before. Sofas, flat-packs and bedroom furniture led the way as consumers opted to invest in home improvements amid a series of promotions.

The BRC figures were a turnaround on the performance in April, which saw sales fall at their fastest rate for a year. They provide a boost for hopes of a sustained recovery in the wider economy despite fears that a continued squeeze on household earnings – lagging behind inflation – could put the brakes on any upturn.

The BRC’s director general, Helen Dickinson, said it was a good result for retailers as they contended with changeable weather patterns and the continuing subdued UK picture.

“The signs are that temporary discounts and offers worked well to tempt shoppers into stores and clear some of the stock that had been slow to sell during the preceding months,” she said.

“This strategy paid off particularly well for furniture and flooring, May’s best-performing category. Customers are still price-conscious but responding well to good deals, especially for big-ticket items. But volatile economic conditions mean that this will remain a delicate balancing act for some time to come.”

The latest figures showed the effects of weather as food sales were boosted by barbecue meats, salads and ice creams early in the month, supplanted by the home comforts of pizzas and ready meals as temperatures dipped later.

Clothes saw a boost in swimwear at the start of May, but consumers also took advantage of clearance sales to pick up bargain knitwear.

Among other non-food items, ball games and tablet computers did well, but there was not enough sunshine to spur a significant increase in barbecue purchases or lift paddling pool sales.

David McCorquodale, the head of retail at KPMG, which compiled the data, said: “While sales didn’t soar through the roof, this is still a very creditable performance from UK retailers. Promoting the right product at the right price made the difference in May. To some extent retailers had their bacon saved by online sales, underlining the growing importance of the digital channel.”