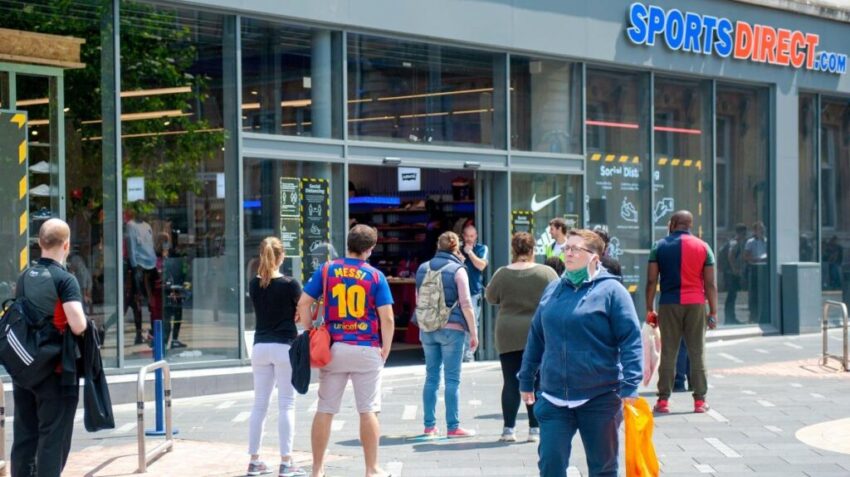 The owner of Sports Direct has criticised the government’s lockdown in Leicester as a “half-cocked plan” while arguing that its stores should be allowed to stay open.

Chris Wootton, chief financial officer of Frasers Group, has written to Michael Gove, the Cabinet Office minister, to ask for clarity over the classification of “essential retail”.

Mr Wootton argued that because Sports Direct stores sold bicycles they were comparable with Decathlon and Go Outdoors, whose stores have been allowed to stay open during the lockdown.

Mr Wootton asked why off-licences were allowed to open but sporting goods shops must shut, given the government’s focus on health. “For the government to deem such items [as alcohol and tobacco] essential to the public over and above the sporting goods we sell is perverse and actually scandalous,” Mr Wootton wrote.

Frasers Group has three Sports Direct stores in Leicester. It is understood to be pressing the government over fears that there could be future regional lockdowns.

“Once again many industries, including retail, get very little time to react and very vague guidance at the same time,” he wrote. “Retail specifically is in critical condition, even before the start of the Covid-19 crisis. The continued bumbling and lurching from half-cocked plan to non-sensical policy is making things far worse.”

Sports Direct changed its name to Frasers Group in December. It was founded by Mike Ashley in 1982 and the group now has 1,592 shops after taking over retailers including USC, Flannels, Evans Cycles, House of Fraser, Jack Wills and Game.

Mr Wootton’s appeal is likely to reignite a row with Mr Gove. At the start of the coronavirus crisis the group wrote to the government to ask whether Sports Direct stores could remain open. Mr Gove brought up the appeal during a TV appearance, prompting Mr Ashley to apologise for the mistiming of the request.

The latest letter to Mr Gove also accuses the government of a lack of clarity over whether furlough payments to new staff are possible in Leicester and if click-and collect-services are permitted.

Mr Wootton ended the letter by requesting that he would “appreciate no further messaging through Piers Morgan’s Good Morning Britain show”.