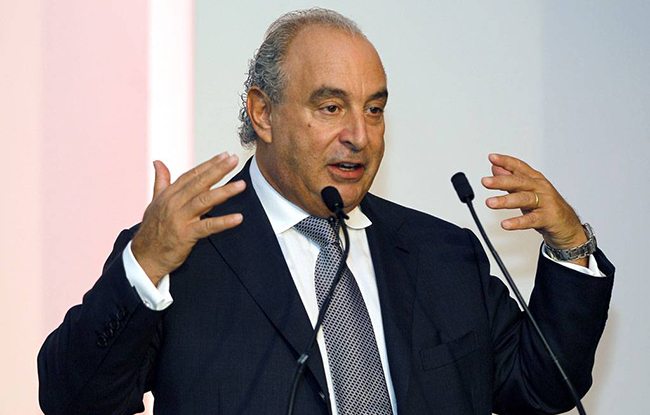 Green said the Treasury had the ability to fix the system so that the Government always receives the same tax take from retailers whatever the state of the economy, and this must change.

In a strongly worded attack on the present system, the proprietor of Topshop owner Arcadia said that the Government deliberately inflated rates despite the fact that rents were falling because of the poor state of the economy. He called for both a rates freeze and a “rates holiday” for small shop owners.

Sir Philip said that the Government’s decision to delay a rates revaluation until 2017 did not take account of the fact that “the world has changed” since the last review in 2008.

The former government advisor said: “There was due to be a revaluation in 2015 and they are now trying to push it to 2017,”

“In the meantime what they [the Government} are able to use is a mechanism [called the] ‘uniform business rate’ [and] if there is a devaluation or the rent moves downwards they have this mechanism where they can inflate, they can create a value of their own.

“They can inflate the uniform business rate above the RPI (retail price index), so keeping their tax revenues in line. [They] fix it so they don’t lose any revenue.”

Sir Philip said that the situation was so serious for smaller shops the Government should consider that “they need a bit of help” and suggrsted that giving them a rates holiday or allowing small shop owners who pay annual rates of between £20,000 and £50,000 to pay a nominal sum.

Sir Philip’s demand for reform of the rates system is supported by many high street retailers, including John Lewis, Boots, Tesco and Sainsbury’s. Speaking recently to the Business, Innovation and Skills Committee during a hearing on the future of the high street, representatives from Boots, John Lewis, and Britain’s largest supermarkets identified business rates as the key issue facing Britain’s troubled high streets.

The retailers said it was time to “rebalance” the system so that businesses with a lot of physical stores were not unfairly penalised. Sir Philip called for a “level playing field” with online retailers.

Gourlay said rebalancing the costs of retailing offers a “real opportunity for the Government to act” on protecting the high street. He pointed to a report by accountants PricewaterhouseCoopers that showed the tax burden on Britain’s leading retailers has increased 65pc since 2005, driven by an 80pc increase in tax outside of corporation tax.

The report by PwC warns that the Government’s pledge to cut corporation tax to 20pc by 2015 has been offset for retailers by a surge in business rates and employers national insurance contributions.