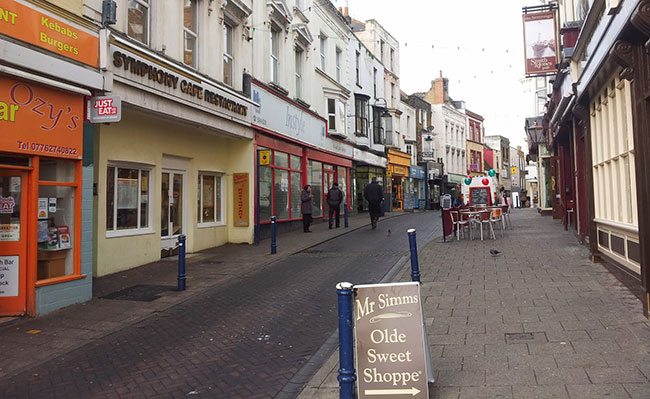 On average 14 shops are closing every day as UK High Streets face their toughest trading climate in five years, a report has found.

A net 1,123 stores disappeared from Britain’s top 500 high streets in the first six months of the year, according to the accountancy firm PwC.

It said fashion and electrical stores had suffered most as customers did more shopping online.

Restaurants and pubs also floundered as fewer people go out to eat or drink.

London was the worst-hit region, PwC said, while Wales had the lowest number of closures.

“Looking ahead, the turmoil facing the sector is unlikely to abate,” said Lisa Hooker, consumer markets leader at PwC.

“Store closures in the second half of the year due to administrations and company voluntary arrangements [a form of insolvency] already announced will further intensify the situation.”

According to PwC, 2,692 shops shut across the UK in the first half of 2018, while only 1,569 new stores opened. The data looks at retail chains with more than five outlets.

Which sectors were hit hardest?

Electrical goods stores were among the biggest casualties, largely due to the collapse of Maplin in February that resulted in 50 stores being closed.

Italian restaurants also struggled, as Jamie’s Italian and Prezzo both shut stores after striking rescue deals with their creditors, while Strada also made closures.

PwC said there was net decline of 104 fashion shops and 99 pubs as openings failed to replace closures “at a fast enough rate”.

There were some bright spots, however, with supermarkets, booksellers, ice cream parlours and coffee shops all seeing slim net gains in their store counts.

Which regions suffered most?

According to PwC, Greater London had the largest number of store closures of any UK region, with a fall of 716, while only 448 were opened.

Other cities that suffered included Leeds, which opened nine stores but closed 35, and Reading where there were 39 closures and only 18 openings.

Newcastle fared worst in the North East, with a net decline of 17 stores, while Nottingham fell by 35.

None of the UK regions analysed by PwC recorded a net gain in store count in the first six months of the year.

Retailers are facing a perfect storm of pressures as consumers rein in their spending and do more of their shopping online.

As a result, many retailers have found themselves struggling to pay their rents and other overheads, such as a rising minimum wage and business rates.

In last month’s Budget, Chancellor Philip Hammond promised to spend £900m on reducing the business rates bill of 500,000 small retailers by a third.

However, the British Retail Consortium said the chancellor was “tinkering around the edges” and called for “wholesale reform” of the business rates system.

Jake Berry, the minister responsible for High Streets, said the government was determined to make them thrive.

“We have created a £675m fund to help high streets adapt, slashed business rates … and are creating a task force guided by Sir John Timpson, one of the UK’s most experienced retailers, to ensure that High Streets are adapting for rapid change and are fit for the future,” he said.

Speaking about the statistics Carl Holloway, co-founder of Rotaready said: “The traditional High Street is struggling as it strives to compete with online giants. Staffing is a business’ biggest operational expense, but while the recent reduction in business rates is welcome news, it doesn’t help with ever-increasing wage bills and costly staff turnover.

So, investing these savings in technology that can reduce costs and further level the playing field is crucial for survival. The ability to accurately forecast demand and align staffing levels means businesses benefit from a reduction in labour bills and streamlined operations, while staff benefit from greater flexibility and a work life-balance.

Retailers that are already embracing modern technology are arguably the ones thriving in a harsh and competitive retail environment, while others are struggling to stay afloat .”

Richard Stables, CEO of Kelkoo, added: “The high street is in the midst of a cutthroat period –  with the closures of M&S, Debenhams and House of Fraser indicating that not even the largest retailers are safe.”

“For many retailers, an extensive and expensive property portfolio is more of a drain on resources than an asset. With growing consumer demand for convenience, retailers must ensure they can deliver customers through a fully integrated omnichannel offering. Unfortunately, this is exactly where many retailers are falling short.”

“Unsurprisingly, traditional fashion retailers have been hit hardest due to their unwillingness to change to meet consumer demand – even under intensive pressure from online pure-play brands. The rise of social shopping is rapidly making bricks and mortar retailers obsolete – the onus is on these traditional names to adapt or die.”