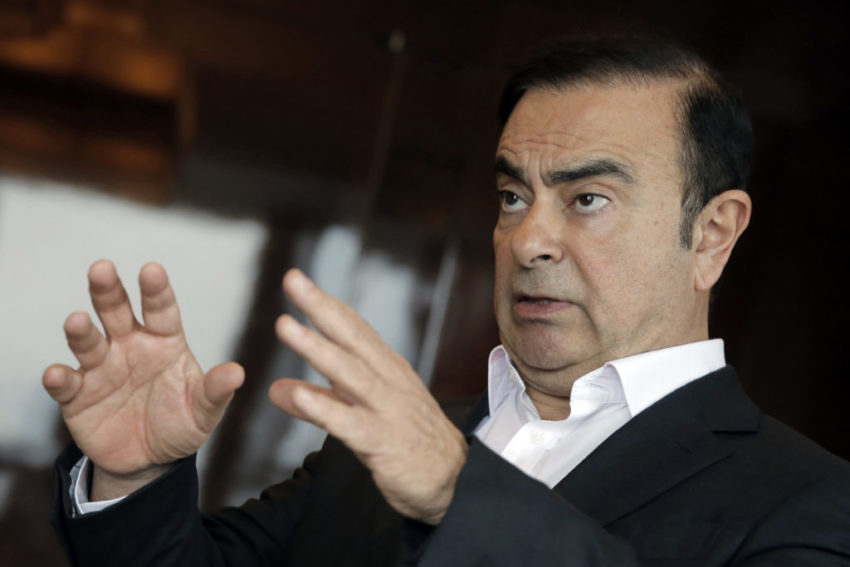 Japanese prosecutors were considering whether to file formal charges against Nissan Motor chairman Carlos Ghosn amid a probe into allegations he misused company assets and under-reported millions of dollars of income.

The arrest of Mr Ghosn after a whistleblower disclosed the alleged misconduct left many in Japan stunned by the downfall of a relentless cost cutter who appears to have spent lavishly on himself.

Prosecutors said they were holding Mr Ghosn, 64, for allegedly collaborating to falsify securities statements and under-report 44.6 million dollars in income from 2011 to 2015.

A second Nissan executive, Greg Kelly, was also suspected of collaborating with him.

“We will watch developments closely.”

There was no word from Mr Ghosn himself. Prosecutors have refused to say where he was being held.

Mr Ghosn officially still leads the Renault-Nissan-Mitsubishi alliance as CEO and chairman, with the board of directors of French carmaker Renault saying he will remain as chairman and CEO after a meeting on Tuesday evening.

The board tapped the carmaker’s number two, Thierry Bollore, to fill in for Mr Ghosn while he is “temporarily incapacitated”.

A statement issued after the three-hour meeting said the board was “unable to comment on the evidence seemingly gathered” against Mr Ghosn. It said Mr Bollore, Renault’s chief operating officer, will lead “on a temporary basis”.

The prosecutors, who reportedly arrested Mr Ghosn after questioning him upon his arrival by private jet at Tokyo’s Haneda airport, have 48 hours from the time of Ghosn’s arrest on Monday to decide whether to press charges.

They can hold a suspect for up to 20 more days per charge if they decide they need more time.

Nissan’s board was due to meet on Thursday to consider dismissing Ghosn and Kelly.

Earlier this year, Mr Ghosn signed a contract that would have run through 2022.

Of French, Brazilian and Lebanese background, Mr Ghosn also is a towering corporate figure in France, where Renault is one of the heavyweight industrial survivors.

He has met repeatedly with the past four French presidents; no major economic event in France was held without Mr Ghosn.

But French Finance Minister Bruno Le Maire told broadcaster Franc-Info on Tuesday that Renault should name temporary leadership as Mr Ghosn is not in a position to head the group.

Mr Ghosn’s Lebanese heritage is a source of pride in Lebanon, and in Beirut the foreign minister, Gibran Bassil, issued a statement saying the Lebanese ambassador to Tokyo was told to look out for “the model of Lebanese success abroad”.

He said the Lebanese foreign ministry would stand by Mr Ghosn to ensure he gets a fair trial.

In Japan, where foreign executives are scarce and even the biggest corporate bigwigs tend to keep a low profile, Mr Ghosn’s status is more ambiguous.

He is admired for driving a turnaround at Nissan when it was near bankruptcy and for his foresight in pushing to bring electric and autonomous cars to the masses.

But in a 90-minute news conference late on Monday night, Nissan chief executive Hiroto Saikawa said Mr Ghosn had too much power and the company was overdue for some change.

The scandal was a “negative outcome of the long regime of Mr Ghosn,” he said.

Public broadcaster NHK said Mr Ghosn was in charge of allocating pay among Nissan’s top executives and is suspected of siphoning off some of that remuneration.

He also is suspected of underpaying his share of the rent and misusing company funds on his company-issued housing in Lebanon, Paris, Amsterdam and Rio de Janeiro, where his apartment is on the wealthy Copacabana beach strip.

Mr Ghosn’s compensation from Nissan, generous by Japanese standards, was only part of his overall income since he also was paid salaries by the carmaker’s alliance partners Renault SA and Mitsubishi Motor Corp.

Repeatedly questioned over how the company could have let financial misconduct persist for so long, Mr Saikawa said systems inside Nissan limited transparency.

The allegations are a serious blow at a time when Nissan and Mitsubishi are still recovering from scandals over altered results of emissions and fuel economy tests on vehicles sold in Japan.