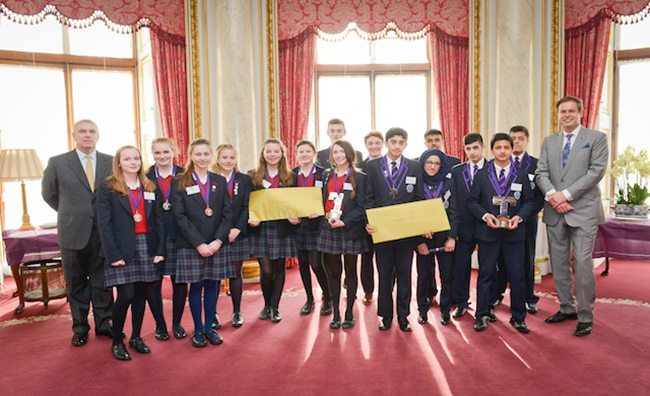 Since the inaugural competition in 2012, one team has been crowned winner each year; but this time a surprise announcement by Peter Jones saw three teams share the title – one from each key stage of the competition. Each team won £1,000 as an investment towards their business.

The competition has doubled the number of student applicants since its start three years ago, with this years Tycoon in Schools attracting hundred of schools from across the country competing to prove their entrepreneurial prowess to the Dragon.

The three winning teams were:
Retrocycle – a seven strong team of 13-14 year olds from Queen Anne’s School in Berkshire combatting global waste, by producing and selling a range of eco-friendly key rings made from old bottle tops and bowls and coasters made from old magazines.

Ethical Print – seven year 10 students from West Yorkshire based Westborogh High School, who created a local community newsletter to promote events and activities and sell advertising to local businesses. They have decided to distribute profits between five charities featured in the final newsletter.

The ceremony hosted by HRH The Duke of York as part of his continued focus on championing and promoting entrepreneurship and ongoing support for the Tycoon in Schools competition.

The competition is run by the Peter Jones Foundation to encourage and inspire young people and put enterprise at the heart of the education system.

Jones commented: “I was delighted to announce the winners of Tycoon in Schools at a ceremony at Buckingham Palace this afternoon with HRH The Duke of York, KG, Patron of The Peter Jones Foundation.

“The standard was so high this year that we decided to crown not one, but three winners. All of the teams have worked so hard and I have been bowled over by their enthusiasm and achievements throughout the competition. With thousands of students taking part, it has been the most successful Tycoon in Schools yet.

“Retrocycle, Ethical Print and Mount were the teams that really stood out to all the judges. They all excelled in each area of the judging criteria, came up with some incredibly innovative ideas, worked excellently as a team and generated some incredible profits.

“I wish the teams the very best of luck and encourage them all to continue to develop their businesses – you never know how far your ideas can go! I urge all young, budding entrepreneurs to get involved in Tycoon in Schools 2015.”