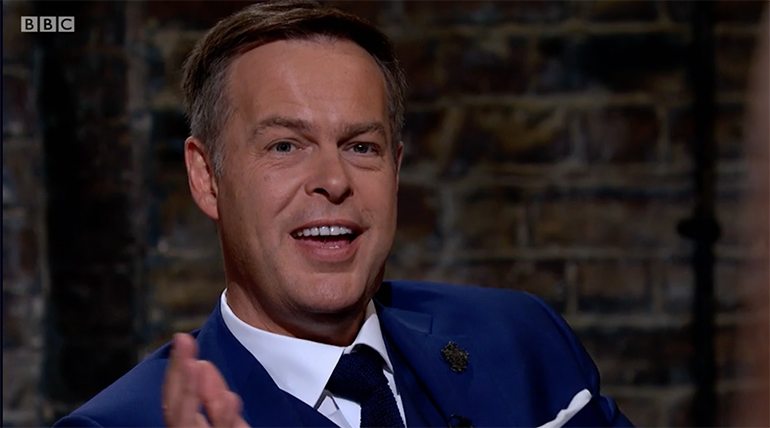 Peter Jones was on fine form tonight after he savagely delivered a seriously harsh put-down to a couple looking for a £75,000 investment in a company specialising in free-from foods.

On the first episode of the new series of Dragons’ Den , Julianne and Matthew entered the den looking to part ways with just 5 per cent of the company.

But it was soon revealed that, despite having been with the company since the beginning, Matthew didn’t own any shares in it.

When Peter questioned why this was the case, he said: “I’ve never asked for part of the business. I’m just happy to work for and alongside Julianne.”

But Jones wouldn’t leave it be, and questioned how important he really was to the business.

Peter then asked the same question to Julianne, who replied: “I’d say Matthew is very vital in the company and I think he knows that. He’s never talked about shares, actually – at all.”

“My question is, why haven’t you?” Peter interrogated her.

She admitted: “Why haven’t I? Well, we’re together as well.”

Jones gave her a slightly bemused look. “What do you mean ‘together’?”

They both looked at each other and then said that they were a couple.

Matthew said: “Yeah so I guess I have a vested interest in making the company grown.”

But Peter dropped the mic by quipping: “Yeah, you have a vested interest… until she leaves you.”

And viewers thought this was a bit harsh.

Peter back to his brutal best 😂 #DragonsDen

Entrepreneur: ‘I have an invested interest’
Peter Jones: ‘Yeah until she leaves you’.
Not pulling any punches on #dragonsden

Another commented: “Entrepreneur: ‘I have an invested interest’ Peter Jones: ‘Yeah until she leaves you’. Not pulling any punches on #dragonsden.”