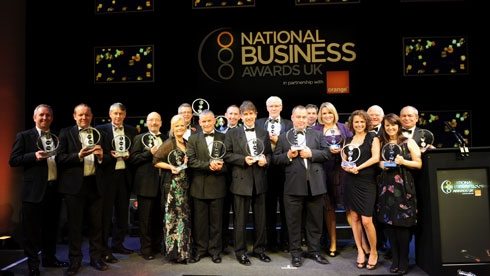 The evening opened with a video message from the Prime Minister David Cameron who congratulated all of the finalists recognised by this year’s awards saying they were an ‘inspiration not only to the business community but those in government trying to support recovery’.
“These awards, they really do show off the best of British, from innovation to growth, from customer focus to corporate responsibility, through health and well-being to better regulation, from entrepreneur of the year to leader of the year. Category after category celebrating outstanding achievements, businesses small, medium and large, local, national and international the true pride of Britain and the true wealth creators in our economy.   You are the doers and the grafters who will get this country back on its feet. The people who will get our economy growing again. And it’s absolutely right that we should take this moment to recognise what you do”, the Prime Minister said.
Nick Clegg, the Deputy Prime Minister, delivered the keynote speech to the room packed full of the country’s top business leaders and entrepreneurs in attendance, including Johnson Matthey’s Sir John Banham, Co-op’s Peter Marks, the National Trust’s Dame Fiona Reynolds, and Tesco’s Sir Terry Leahy, the latter, who won the Daily Telegraph Award for a Decade of Excellence in Business.
Applauded for heading up a company that has been called the star of the recession, it was Martin McCourt, CEO of Dyson and Sir James Dyson’s right hand man, who won the prestigious Orange Leader of the Year accolade.  The public was invited to vote for their favourite leader to win the Orange Leader of the Year and their votes were combined with those of an expert panel of 20 judges.
It was Wow! Stuff, that won the Orange Innovation Award. First recognised by the National Business Awards at a regional level in 2008, highly commended in the Growth Strategy and Marketing categories, the Wolverhampton-based company won SME of the Year in the Midlands regional finals in 2009. Gaining market share very quickly within the traditional and well-established toys industry, Wow! Stuff has had to be very creative to compete and excel. It is this creativity, practically applied for commercial success that above all impressed the judging panel.
Manchester’s, ENER-g plc, won the 3i Private Business of the Year category; London-based Pearson triumphed with the Coutts & Co Large-Cap Business of the Year Award; and Telecity Group, London, was presented with the Grant Thornton Mid-Cap Business of the Year accolade.
It was the Co-operative Group, Manchester, who won the ICAEW Corporate Responsibility and Sustainability Award; the Police Service of Northern Ireland, Carrickfergus, secured the Health, Work and Well-being Award; and Crafter’s Companion based in Bishop Auckland, was awarded the Santander Small to Medium Sized Business of the Year accolade.
“The geographical spread of the 2010 award winning organisations is astonishing”, said Philip Forrest, Chairman of Judges, the National Business Awards. “It is really positive to see that Britain’s public and private sector businesses, stretching from north to south, have the capacity, energy and ambition to succeed during these challenging conditions”, Forrest added.
“The economic climate continues to present UK businesses with an unprecedented challenge and it is therefore encouraging that the entries in this year’s National Business Awards have shown no drop in quality or performance. Congratulations to all winners and finalists for demonstrating great strength in the ability to adapt and innovate quickly which no doubt reflects the resilience and optimism that are the hallmarks of UK enterprise.”   Forrest concluded
Full list of winners:
The Orange Leader of the Year
Martin McCourt, CEO, Dyson
Martin McCourt (centre) with last years winner Peter Marks & Richard Moat from sponsors Orange
The Daily Telegraph Award for Decade of Excellence in Business
Sir Terry Leahy, CEO, Tesco
The 3i Private Business of the Year
Ener-g plc
The Coutts & Co Large-Cap Business of the Year
Pearson
The Grant Thornton Mid-Cap Business of the Year
Telecity Group
The Orange Innovation Award
Wow! Stuff
The Better Regulation Award
Export Control Organisation
The Health, Work and Well-being Award
Police Service of Northern Ireland
The Health, Work and Well-being for Small Business Award
PORT OF BLYTH
The ICAEW Corporate Responsibility Award
The Co-operative Group
The Santander Small to Medium Sized Business of the Year
Crafter’s Companion
Sara Davis from Crafter’s Companion with Steve Pateman from sponsors Santander
The Business Link Growth Strategy of the Year
Samworth Brothers
The Blackberry Customer Focus Award
apetito
The Blackberry Customer Focus for Small Business
Ella’s Kitchen
The Entrepreneur of the Year
Nick Ogden, Voice Commerce
Shaun Lavelle, MD of Voice Commerce representing Nick Ogden with Peter Jones
The Excellence in Marketing Award
Waitrose
The Employer of the Year
Glasgow Marriott Hotel