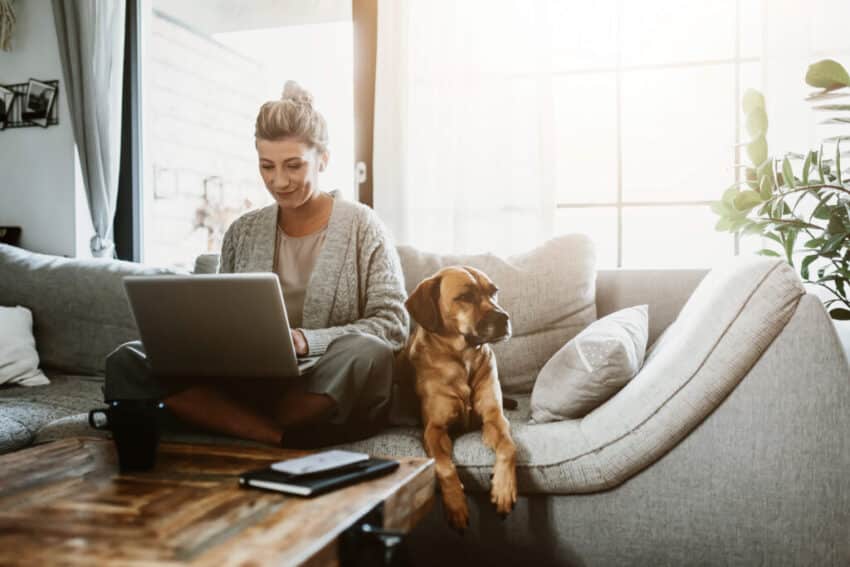 The proportion of people working from home more than doubled in 2020 during the Covid-19 pandemic, though it remained a minority of overall workers across the UK, according to an official snapshot.

The Office for National Statistics (ONS) said about a quarter of people had worked at home at some point in the week before they responded to officials conducting its annual population survey. It said that this compared with 12.4% of workers in 2019.

However, some staff were more likely to work from home than others in a reflection of the uneven impact and experiences of the health emergency across the UK – with much higher concentrations of workers doing their jobs from home in London than elsewhere.

According to the figures, 46.4% of people working in the capital said they worked at home at some point in 2020. The highest proportion of home workers were in affluent suburbs. More than 70% of all staff in the borough of Richmond upon Thames said they had already worked from home.

Home working was lowest in rural Scotland and the northern English towns of Burnley and Middlesbrough, where fewer than 14% of employees said they had ever worked from home.

The annual population survey included two questions: one asking respondents if they had worked from home in the week prior to being interviewed by ONS officials, and another asking if they had ever done any work from home. There was a smaller increase in the numbers who had ever worked from home at any point, rising from 26.7% in 2019 to 36.5% in 2020.

Despite confirming a rise during the pandemic, the figures suggest most of the British workforce continued to travel to workplaces during the health emergency, despite portrayals of abandoned city centres and empty offices in the media.

Reflecting the economic landscape of Britain and the ability to transfer some jobs to remote working more than others, cities with larger numbers of office-based jobs in sectors such as finance and IT had higher proportions of people working from home. Places with a higher local share of manufacturing jobs, as well as retail, leisure and hospitality work, had much lower figures.

According to the snapshot, more than half of managers, directors, senior officials and professional staff worked from home, compared with fewer than 10% of cleaners, factory workers and drivers.

The figures have been released as lockdown measures are gradually relaxed and more people start to return to city-centre offices, reflected in rising urban footfall, road trips and use of public transport. There is growing speculation over the future of city centres and office-based jobs, as many companies look to retain some flexible working practices.

The accountancy firm BDO has told staff to decide for themselves when to come into the office as lockdown measures are eased, enabling staff to work in the most productive location for the task they are doing. KPMG has launched plans for its 16,000 UK staff to work a “four-day fortnight” in the office, with the rest at home or with clients. However, some firms are ordering staff to be ready to return to the office when restrictions are lifted, including the US banks Goldman Sachs and JPMorgan.

The ONS said the share of people doing their jobs remotely had fluctuated in line with government restrictions, with as many as 46.6% of employees reporting in April 2020 that they had worked from home at some point during the first lockdown. This fell to a low of 27% in August as restrictions were relaxed and the government urged people to return to work, before rising sharply back to 47% in early February this year as the pandemic worsened.

Chris Shine, a policy analyst at the ONS, said: “As the country emerges again from lockdown, it is too soon to say how permanent or widespread these changes will prove to be, with many commentators talking about ‘hybrid’ forms of working in which employees attend a central workplace, but less often than in the past.”