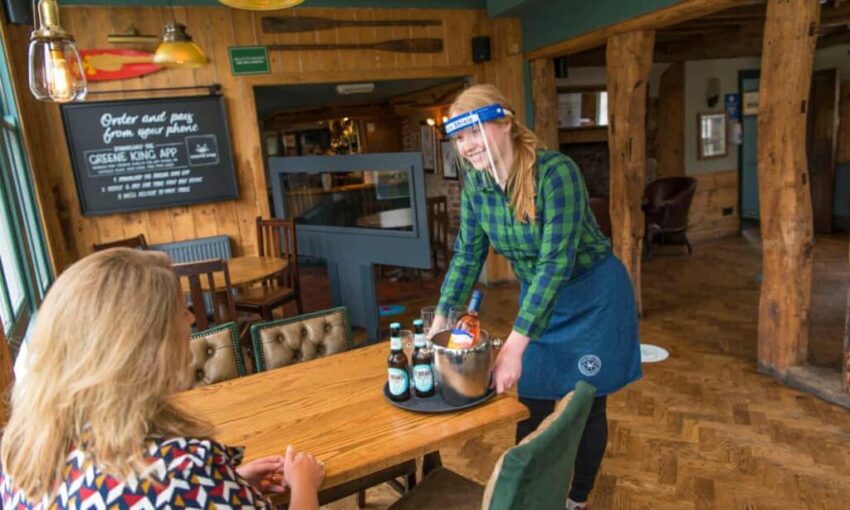 Patrons of Greene King pubs will use a one-in, one-out green light system when they go the toilet to guard against the spread of Covid-19, but the company insists it will retain the “very essence of the great British pub”.

The 1,700-strong pub chain says it has spent £15m on preparing venues to reopen, which could happen as soon as 4 July in England.

The rival chain JD Wetherspoon has already laid out its blueprint for how pubs will look in a world shaped by the pandemic, with protective screens between tables and staff wearing goggles and masks.

Greene King will deploy some of the same plans but unveiled some new measures it hopes will make pubs safe enough to avoid coronavirus transmission, without ruining the atmosphere.

It said toilets would be cleaned every 15 minutes and customers would be allowed in only one at a time. Upon entering and leaving the toilet, they would be asked to flip an indicator between red and green, so that other patrons knew whether someone was inside.
Customers are being advised to pre-book a table rather than stand at the bar, while perspex screens will be erected to create barriers between tables and between drinkers and bar staff.

A “pub host” will welcome people at the entrance and show them to tables, and keep physically distanced queues in order, while signage will be used to direct people to routes around the pub that minimise contact.

Like Wetherspoons, the company is urging customers to pay using its app and to use hand sanitiser stations positioned around the pub.

Each pub will provide one-time-use menus customers can take away or dispose of, while cutlery will be wrapped and condiments in sachets or in fresh ramekins.

A designated “pub safe monitor”, wearing a special uniform, will be tasked with ensuring compliance and dealing with any safety concerns raised by pub-goers.

Greene King’s chief executive, Nick Mackenzie, said: “Of course, customers will notice some differences when they return but it’s important that alongside implementing the changes, we maintain the very essence of the great British pub.

“Many pubs across the country, including a number of our own, will not be financially viable or able to open for operational reasons with the current restrictions in place and we hope that, for the future of our industry, these measures will be short-lived.

“We are working towards a phased reopening and are planning to open as many as we can.”