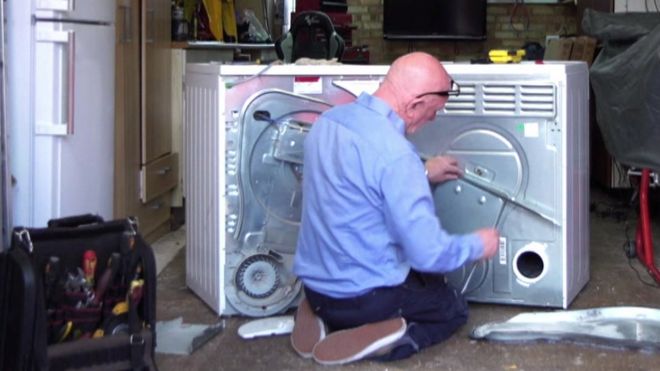 The government is to issue an “unprecedented” recall notice of up to 500,000 Whirlpool tumble dryers which pose a fire safety risk.

It comes four years after Whirlpool issued a warning after it found its Hotpoint, Creda and Indesit dryers had a fault which needed fixing.

The fault was blamed for at least 750 fires over an 11-year period, according to the government.

Whirlpool said safety was its “number one priority”.

It urged anyone still owning an affected to dryer to contact the company immediately on 0800 151 0905.

A spokeswoman added: “In the meantime, anyone with an affected dryer that has not been modified should unplug it and not use it until the modification has been completed.”

Last year, the BBC’s Watchdog Live consumer programme uncovered cases in which machines had caught fire even after being fixed.

And in April, the Office for Product Safety and Standards (OPSS) published a report, urging Whirlpool to improve its risk management, and “reach affected consumers in more creative ways” to minimise the risk of faulty machines still being in people’s homes.

She was responding to Conservative minister Andrew Griffiths, who told MPs that he was still concerned about whether people still had “unsafe products” in their homes.

“Finally, over a year since we called for a recall of defective machines and 18 months since the Beis Committee reported on Whirlpool’s inadequate response to safety flaws, the government is at last showing some teeth,” she said.

David Chaplin, a spokesman for consumer group Which? said there were still “serious questions” about the 500,000 unmodified machines that “Whirlpool has already struggled to locate”.

He said: “People’s lives have been put at risk for far too long, so it’s a hugely significant step that these machines are set to be recalled.

“The government must urgently explain what it is going to do about the millions of modified machines still in people’s homes, following serious concerns that have been raised by people who have experienced fires, smoke and burning despite the so-called fix.”

A Whirlpool Corporation spokeswoman said: “We remain committed to resolving any affected tumble dryers that have not yet been modified.

“To this end, we are in ongoing discussions with the Office for Product Safety and Standards to agree additional measures we have proposed to reach consumers who have not yet engaged with this safety programme.

“We have co-operated with OPSS throughout its recent review of the programme and welcome its findings that consumers whose tumble dryers have been modified can continue to use them safely.”