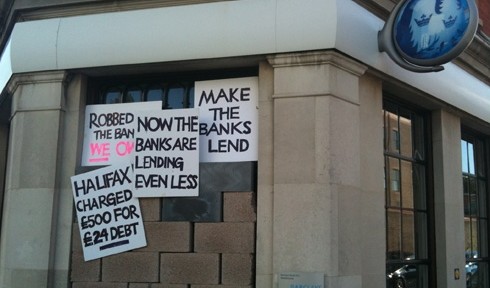 The report reveals that the financial sector is systematically failing to lend to the UK’s most innovative and fast-growing small businesses, which are holding back the economy. This is leading to a “discouraged economy in which innovation, investment and dynamism are stymied by a self-serving and inflexible banking sector.”
The Discouraged Economy report is part of a series of research papers from the Big Innovation Centre – a new initiative from The Work Foundation and Lancaster University – which calls for the UK to capitalise on the rich potential of current and future waves of technological and scientific opportunity by bringing together leaders in the world of business, academia and policy-makers to produce pioneering research to drive long-term economic recovery in the UK.
Co-authored with Paul Nightingale from SPRU at Sussex University, the report calls for rigorous ring-fencing (or ideally full separation) of commercial and retail banking from high risk investment banking, along with an injection of more capital.
This would change incentive structures so that supporting the UK economy, and specifically lending to innovative SMEs, becomes more attractive to the banking sector. Higher capital ratios would lower risk premiums so that any rise in bank funding costs would be trivial.
In addition, it would create an environment where SME lending is not seen as a consumer of scarce risk capital with a high opportunity cost of foregone investment banking opportunities. Instead, SME lending would be a useful profit stream in its own right, competing for attention with other profit and revenue streams that all have lower returns.
Will Hutton, Chair of the Big Innovation Centre, said, “The current UK financial services sector has grown bank assets to more than four times British GDP – of which lending to UK corporate companies constitutes a mere 5 per cent of lending. Despite, or because of this growth, a key sector of the economy – the innovative British “Mittlestand” – has been under-supported.”
“This lack of support to SMEs encourages perception among firms which should qualify for lending that they will not get credit, leading to significant numbers of discouraged borrowers, who thus don’t seek out loans.”
“This lack of investment leads to reduced levels of innovation in the economy, creating a self-reinforcing cycle of less innovation, less investment and less dynamism. Such a discouraged economy is particularly problematic at a time when the UK needs to do all it can both to grow and rebalance its economy.
“This is further adding to the growing disconnect between the financing needs of the UK’s knowledge economy and the development of the financial system.”
The paper draws on academic research and the interim findings of a survey of small firms undertaken by the Federation of Small Business which shows that while the bulk of firms had not applied for loans, of those that did only 41per cent received all the funds they sought.
Recent research has highlighted the vital role of a small number of high growth innovative firms in generating new jobs and driving innovation. These are the most likely to face financial restraints on their growth.
For example, The Work Foundation’s research using the Small Business Survey found that in 2007-2008 about 27 per cent of SMEs showing sustained growth said that finance had been a problem, compared with 21 per cent of all other SMEs.
Hutton concluded: “Requiring banks to carry increased capital while in addition requiring separation or as a second best, tough ring-fencing between investment and retail banking, will not only help de-risk the UK financial system but stimulate lending to high growth innovative SMEs.”