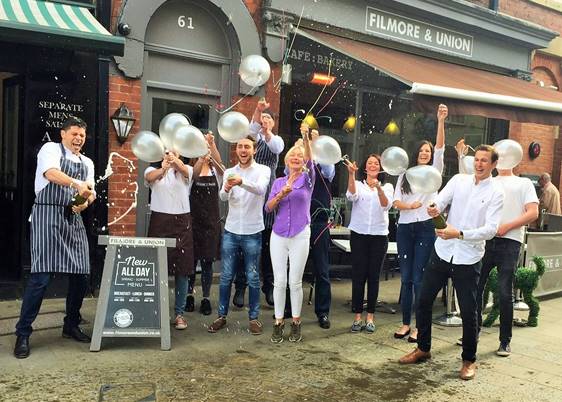 Filmore & Union launched their campaign with Europe’s largest online crowdfunding platform, Crowdcube, in May this year with a target of £500,000 and have now successfully raised a total of £931,960 from 317 investors in return for 22.28 per cent equity.

The extra funding means that the healthy eating company can open more sites in a shorter space of time than initially planned, with a new site in Ilkley scheduled to open next week followed by restaurants in Harrogate at the end of August, Beverley in September, and an extension of the company’s Wetherby restaurant.

The company are also going to use some of the capital raised to invest in a brand new cold press machine, which is relatively new to the UK from America, and retains more of the nutrients, fibre and protein from the fruit and vegetables.

Filmore & Union was founded in 2011 by Adele Carnell, a former wellness clinic owner, and nephew Will Pugh, a Michelin trained chef, who were frustrated at the lack of healthy, unprocessed food on the high street.

The duo went on to open their first café and restaurant on Low Petergate, York, in March 2012 and now operate from 7 sites across Yorkshire, with a group turnover of £3.2million in 2014.

Over the next three years, Filmore & Union’s turnover is expected to increase by £3.8million with their profit set to rise by 207 per cent and they expect to serve over 1 million of their fresh ‘remedy’ juices.

The company heavily invested in a new CPU (Central Production Unit), warehouse and head office in Wetherby last November to facilitate the expansion which also has the capacity to cater for up to 30 sites.

Filmore & Union’s director, Adele Carnell, said that the success of their funding campaign is surreal.

“We can’t believe we’ve managed to overfund by such a large amount – the response from customers and investors from across the country has been overwhelming and we want to thank everyone for their support during our journey so far.

The majority of our investment has come from our customers which we are so honoured by and can’t wait to open up moreFilmore & Unions across the region to meet their requests.

Overfunding has meant we are able to speed up our growth which hopefully means investors will see a return quicker than planned.”