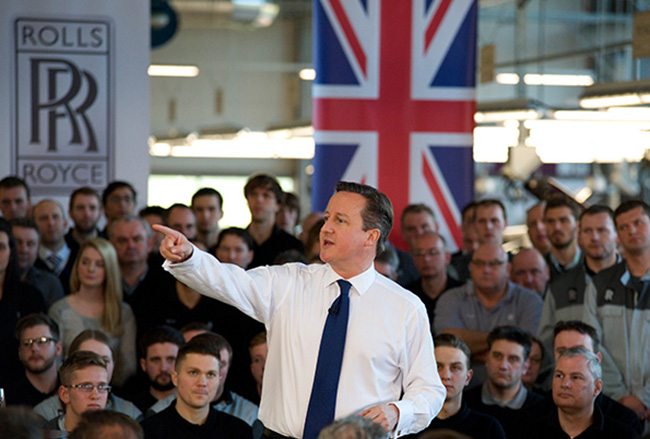 The Prime Minister was presented with a letter announcing the news by Torsten Mueller-Oetvoes, Chief Executive Officer, Rolls-Royce Motor Cars.

The Prime Minister said, “Rolls-Royce is a British manufacturing success story and the decision to build their new model at Goodwood, reaffirming their commitment to the South of England, is a vote of confidence in our long-term economic plan to back business, create jobs and build a more resilient economy. This Government is backing our automotive industry which is going from strength to strength, providing financial security to almost 150,000 hardworking people across the country and adding £14 billion to our economy.”

The Prime Minister toured the Home of Rolls-Royce, meeting with many of the company’s skilled craftsmen and women and learnt about the company’s unique Bespoke hand craftsmanship. The visit concluded with the Prime Minister hosting an open forum with over 800 employees, during which he congratulated the company on five consecutive years of growth and success and the quadrupling of sales and production. He also commended the marque’s championing of future talent through its industry-leading Apprenticeship, Graduate and Student programmes and welcomed the company’s expansion plans.

Torsten Mueller-Oetvoes, Chief Executive Officer, Rolls-Royce Motor Cars, said, “We were privileged to welcome the Prime Minister to the Home of Rolls-Royce at Goodwood and I thank him for his recognition of our outstanding success over the past five years. His positive words were warmly received by the craftsmen and women who met him during his tour of our Manufacturing Plant.” He continued, “The all-new Rolls-Royce model, announced today, will herald a new chapter in the remarkable British manufacturing success story that is Rolls-Royce Motor Cars. It will guarantee long term sustainable growth, secure investment and jobs for the future, and ensure that Rolls-Royce Motor Cars remains at the pinnacle of British luxury manufacturing.”

Rolls-Royce Motor Cars recently revealed record sales results for a fifth consecutive year, with more than 4000 cars sold globally during 2014, the first time in the company’s 111-year history. The company has created over 200 new permanent jobs in the past 18 months to meet customer demand, particularly for Bespoke cars. The number of employees at the Home of Rolls‑Royce has doubled in the last five years and now stands at 1500, primarily in skilled or highly skilled jobs.

Further evidence of Rolls-Royce’s commitment to expansion in Great Britain came last September when the company announced plans for its new Technology and Logistics Centre at Bognor Regis, close to Goodwood. Construction of the new 30,000m2 facility, which is due to open in 2016, is well underway with around 200 existing and new roles in technical and logistics functions to be based at the Centre.

The letter that the Prime Minister was presented from the Chairman and the Chief Executive of Rolls-Royce Motor Cars on the subject of a new Rolls-Royce was:

The launch of Phantom in 2003 marked the beginning of the renaissance of Rolls-Royce Motor Cars. Since then, we have set a new benchmark for what a super-luxury car should be – unique, hand-crafted, beautiful and rare. Often imitated, Phantom has never been equalled and continues to be hailed as ‘The Best Car in the World’ by our customers and media alike.

Twelve years later, after the introduction of successful new models like Ghost and Wraith, Rolls-Royce stands proudly at the pinnacle of British luxury manufacturing, confirming our custodianship of this precious marque.

Now we have reached another seminal moment in Rolls-Royce’s 111-year journey.

Today we confirm that we are developing an all-new Rolls-Royce with exceptional presence, elegance and purpose:

This new Rolls-Royce will be Effortless … Everywhere.

Many discerning customers have urged us to develop this new car – and we have listened. At Rolls-Royce Motor Cars we are uniquely focused on the desires of our customers and are driven by our own thirst to innovate. So we challenged our engineers and design team, led by Director of Design Giles Taylor, to create a different and exceptional new car.

This car will embody all the values and capabilities that drove our two Founding Fathers to secure Rolls-Royce’s reputation, early last century, by taking top honours in rigorous overland adventures such as the Scottish Reliability Trials, the London to Edinburgh event and the Alpine Trials.

Rolls-Royces conveyed pioneers and adventurers like Lawrence of Arabia across the vastness of unexplored deserts and over mountain ranges. In other parts of the world including Australia, India and the Americas, Rolls-Royces carried their owners over challenging terrain with absolute reliability and comfort.

History sets our precedent and our future calls us to action.

This new journey begins now. We will take our time in developing and perfecting this new concept in luxury. We will include our customers, enthusiasts and media along the way and will keep you informed of our progress.

Until then, rest assured, we are creating a motor car in the greatest traditions of our marque.

Sir Henry Royce famously said: “When it does not exist, design it”.

We are doing just that.