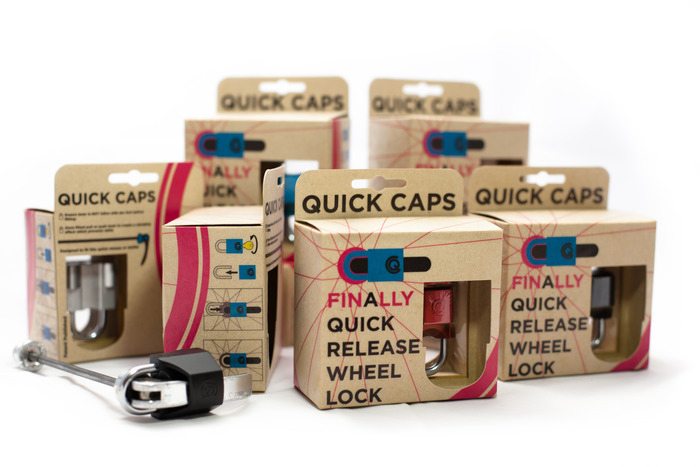 Curtis has continued to innovate by using crowdfunding website KickStarter to get the equipment needed for production, a minimum of £15000. Backers have until Friday to pledge a minimum of £10, giving them the chance to support innovation, as well as receiving a bike lock once production starts. 696 backers from around the world have shown support by pledging a total of £16,059.

Curtis says: “It has taken me 3 hard years to develop a product which could stand up in the marketplace, but it’s taken just 3 weeks for the cycling communities on Kickstarter to prove there is a need for it – it’s just incredible. At the end of the campaign this week we can place the order for the tooling and work on getting Quick Caps out to everyone that has supported getting this product to market, by January 2015 or sooner!”

Crowdfunding allows entrepreneurs to offer something in return for investing in their product, along with the satisfaction that they have helped a project like this off the ground, helping to stand up against bike theft.

The UK police bike theft statistics site states: “It is largely accepted that only 1 in 5 bike thefts are reported to the police, therefore the bike thefts figures below can be considered 5 times higher than the 55,240,500 reported (2012),” showing that there is clearly a market need for this gadget.

The clever design of the lock also means that it is “fit and forget” – the lock never has to be removed unless the owner needs to take the wheel off of the bike. It is also incredibly light, weighing just 51 grams, as to not interfere with the weight or balance of the bike.

The lock never comes into contact with the bike frame, instead locking to the cup of the quick release mechanism, meaning that it doesn’t scratch the bike or rattle around when cycling.

While the base is clamped to the cup of the release mechanism, the lever slots through a hole in the lock, preventing it from being unhinged.

William Ropp, founder of Strategic Product Planning and a University of Cincinnati School of Design alumnus called Quick Caps “a very nice and well thought out piece of engineering and attractive design that easily adapts to stock QR.”