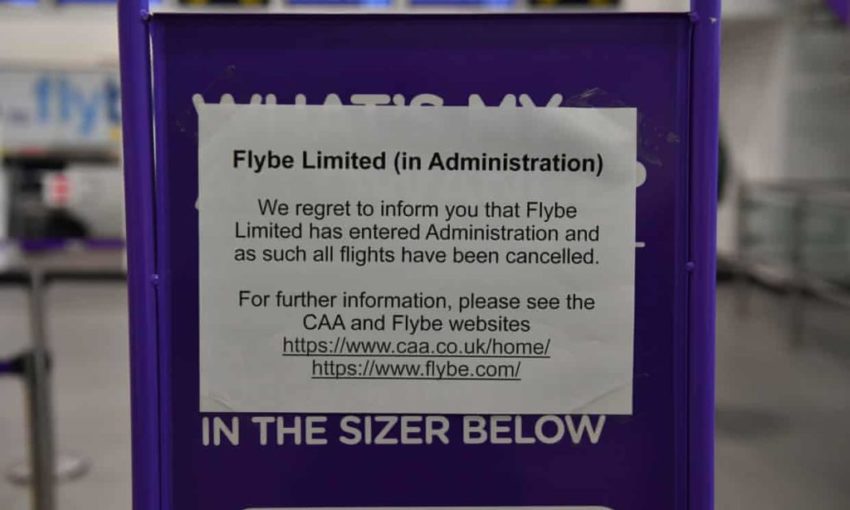 Business figures and politicians around the UK have warned that Flybe’s collapse could lead to severe consequences for regional economies following the loss of key air transport links.

Exeter-based Flybe operates nearly 40% of the country’s domestic flights and there were fears over the impact of its collapse from around the country. In the south-west, Flybe’s failure was met with alarm that there could be substantial ripple effects financially.

“A huge pack of cards has just fallen over,” said Tim Jones, chairman of the South West Business Council. Jones said that if the services the airport provided were not replaced quickly – and lost jobs restored as well – the result could be losses of up to £600m a year to the regional economy.

Exeter airport – where all but one of the scheduled departures on Thursday was supposed to be a Flybe service – is an important hub not just for holidaymakers but for business people who use it to hop to London and other major cities in the UK and Europe. It is also used by people flying in from other parts of the UK to work on infrastructure projects for a week at a time, such as the Hinkley Point nuclear power plant site on the Somerset coast.
Jones said the airport was hugely important because major road and rail routes into and out of the south-west were unreliable. “This area can routinely be cut off from the rest of England.”

A major accident on the M5 or on the A303 can lead to traffic being delayed for many hours. There are often floods on the train line near Exeter and at times of severe weather the line further south at Dawlish can be cut off.

“The dependency on the airport is absolutely profound,” said Jones. “It connects us to national and international markets and it is unthinkable that we should lose it. We will be doing all we can to make sure the government steps in really quickly to fill the gap.”

The Exeter MP, Ben Bradshaw, said it was a big blow to the local and regional economy. He said: “Why did the government say Flybe was vital to regional connectivity last month? [Boris] Johnson’s mantra of ‘levelling up’ our left-behind regions lies in tatters.”

At the airport and at Flybe HQ, tearful staff expressed concern at their job losses. An estimated 1,500 of Flybe’s more than 2,000 workers – from cabin crew to engineers and backroom staff – live in the Exeter area.

Katherine Densham – who had worked for Flybe for 13 years as cabin crew, joining the company straight out of college – heard in the early hours that the company had collapsed.

She had been due to fly from Exeter to London City airport and came to the airport, in her uniform, to check what was happening.

She broke down in tears and said: “I feel really sad. I’m not sure what I’m going to do now. I heard in the early hours of the morning. I thought we’d be saved. I’ve no idea what I’ll do next – try and find some work to pay the bills.”

In Belfast, another key Flybe hub, the chief executive of Hospitality Ulster, an organisation representing the hospitality industry in Northern Ireland, said the collapse was “devastating”. “The regional connectivity that Flybe offered was vitally important to tourism and our wider hospitality sector here, without it there will be a huge impact on visitor access,” said Colin Neill.

Scottish regional airline Loganair said it would fill a substantial number of gaps left by Flybe’s exit from Scotland yesterday, saying it would add almost 400 flights a week on 16 domestic routes including services from Glasgow, Edinburgh and Aberdeen.

Loganair said that by taking on the routes, it would “help former Flybe ground handling agents and airport operators at locations such as Southampton and Exeter to preserve employment in their businesses”. The airline’s chief executive, Jonathan Hinkles, said the move is the result of “several weeks of behind-the-scenes contingency planning work”, cautioning that it will not lead to “over-expansion” and is “robust and sustainable”.

Concerns over the loss of vital transport links were also raised in Birmingham, where Flybe was a key operator at the city’s airport.

“This means of travel is vital for our existence,” said Gareth Jones, managing director of machinery firm HK Technologies, which is based near the airport. “The last thing we want to do is travel to Heathrow, or East Midlands or Manchester. If we have to send our engineers to Ireland they will have to travel by ferry and take their tools with them.”

Being able to fly to a range of other cities is important for the region, tweeted Andy Street, mayor of the West Midlands: “The main focus is now on making sure Birmingham airport maintains its excellent connectivity … I am pleased the airport already has plans to backfill routes.”

A Birmingham airport spokesperson said it had had “very positive discussions” in the past few days with other airlines interested in taking on some of Flybe’s routes from Britain’s second city.