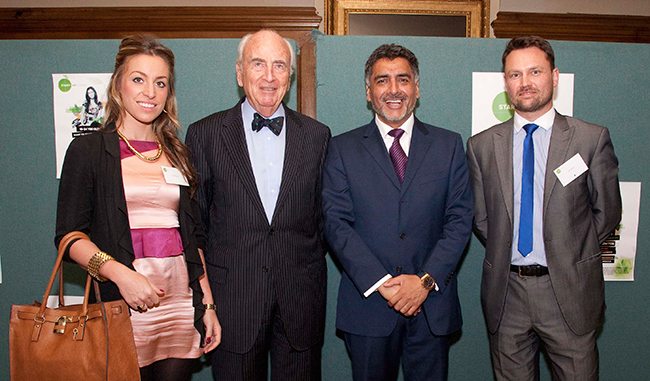 Having worked tirelessly on their companies or through business promotion efforts, Real Business has a look at the industry leaders whose achievements have been recognised.

James Caan
CBE for services to entrepreneurship and charitable services

One of the more recognisable faces on the list due to his previous role as an investor on the BBC show Dragons’ Den. Prior to his TV roles, Caan founded and sold recruitment company Alexander Mann Group and currently heads up his own private equity firm – Hamilton Bradshaw.

However, this honour has come about due to his chairmanship of the Start Up Loans company, supported by the Government under the stewardship of David Cameron’s advisor Lord Young, which provides financial support and mentoring to entrepreneurs.

Brent was one of the few to survive the turn of the century dot.com bubble when he launched last minute.com with Martha, now Baroness Lane-Fox and has become known as one of Britain’s most successful entrepreneurs.

Alongside founding and successfully selling Lastminute.com, Hoberman was picked as one of the World Economic Forum’s Global Young Leaders for the UK in 2009 and set up, alongside the likes of Sean Seton-Rogers and Michael Birch, venture capital firm PROfounders Capital.

Bayliss’ greatest invention the wind-up radio has placed him on the same platform as James Dyson however, his accolade for services to intellectual property has come about though the formation of the Trevor Bayliss Foundation and subsequent Trevor Bayliss Brands PLC.

Bayliss founded these organisations after experiencing problems himself in protecting ideas, the foundation was set up to “promote the activity of invention by encouraging and supporting inventors and engineers”.

Now, Trevor Bayliss Brands PLC provides help in determining the originality of ideas and then protecting them and getting to market.

Edwards has built a global business at the age of 25 and has showed what can be achieved using a simple video camera. His journey, which was featured in an advert for Google, started with filming friends rapping and has turned Edwards into a multi-millionaire and owner of a channel that receives millions of views a year.

He has also created a platform for undiscovered artists such as Ed Sheeran to gain greater exposure, leading to many securing record contracts.

Shaa Wasmund
OBE for services to business and entrepreneurship

Wasmund founded the small business advisory and business software company Smarta, after spotting a niche in the market and whilst her career has taken her from working with boxer Chris Eubank, to running her own PR company which managed the launch of Dyson Vacuum Cleaners to serving as a director at the Bob Geldof-founded travels site Deckchair.com.

Smarta, backed by Theo Paphitis and Deborah Meaden and Wasmund is also an advisor to both the Conservative Party and the Government of startup business and entrepreneurial matters has also written the number one best selling business book Stop Talking, Start Doing.

Deane set up The Cambridge Satchel Company in 2008 from her own home after she decided to make some retro satchels to fund a change of school for her daughter. The business has now become an international success and recently moved to a new production facility near Leicester.

At the beginning of 2014 Deane and the business secured $21m worth of venture capital investment from Index Ventures to build out the company’s management team and recruit specialist digital talent.

With her products on the catwalks of London and New York, Deane has showed how business creation is not just the path of choice for youngsters.

One of the early residents of London’s Tech City, Moross has built up his online digital card business to a position where it has offices across the world, is backed by venture capital and has even closed his own acquisition.

In an unusual turn of events, Moross and Moo decided to open a physical retail outlet in 2013 – having only ever been a digital business before. Revealing it was a desire to better connect customers and products, Moross has shown that not only is the traditional business card not dead but you can even built a wildly successful business around them.

The UK angel investor community is one of the most important sources of funding for early-stage businesses, and Tooth, who is CEO of UK Business Angels Association, has been at the epicentre of its trade body since 2012.

Tooth plays a big part to play in developing policy and interacting with the government to promote small businesses and funding needs.