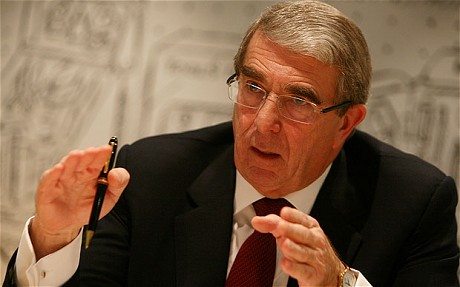 “In the race for growth, the going may be heavy at times, but the horses are willing, the course is understood and there is a shared will to win”, he said.

With special guest, the Foreign Secretary, William Hague, in the audience, Sir Roger said: “There are no whinging businessmen here, but engaged and positive people advocating a more constructive approach to solving the nations’ greatest challenge – growth.”

On the Government’s track record on growth, he said: “There is no doubting the intent of the Coalition in providing business friendly policies – what we now need is more business like execution – delivery on promises made – ruthlessly and urgently.”

But Sir Roger added: “In asking government to step up the pace – we in business need to face up to our responsibilities.” He outlined four “hard truths” that all business people have to face up to in order to deliver their part of the growth agenda bargain and a better future for all.
Outlining the first truth, he said: “The first is to accept that we deserve nothing. The sense of entitlement at all levels is a legacy from a different age.

“We have to earn our way in the world, be smart enough to know what we are good at, brave enough to reach out to new markets, bright enough to develop new products, and driven enough to beat the competition. There is no other way – and as I travel the country, it is heartening to see how many have taken up this challenge.”

On the second truth, he said: “The second truth is when it comes to growth – there are simply still not enough of us fishing in the right pools. So our relative export performance is poor.

“Yes – the markets we feel comfortable in must be nurtured – but new markets must be explored and opportunities seized.

“In the last decade, Britain’s share of global exports fell from 5.3 to 4.1 per cent. Chinese exports have grown exponentially, the Germans have increased market share and even Sweden has managed to hold its own.

“Despite our inherent advantages of time zone and language and many world beating businesses, we are still not punching at our weight, let alone above it – this has to change.

On the third truth, he said: “The third hard truth is our education system. It is failing young people and failing the country as a whole. On a human level, having so many unable to read, write or add up properly is a tragic waste – of talent and of opportunity. But this is devastating on a commercial level too.

“Some promising reforms are underway. But it’ll take business putting its shoulder to the wheel to make it happen.

“In the course of this year the CBI will recommend new ways that this can be done and show it is not just a case of turning around troubled teenagers.
“It goes all the way down to primary and pre-school levels – it is a shared responsibility for all of us – and we must work together to build a young workforce that is fit for purpose and capable of realising its potential.”

On the fourth truth, he said: “The fourth, and last, hard truth is potentially the most disturbing of all – recognising that at a time when business could not matter more – it could not be trusted less.

“In the way we pay ourselves, present ourselves and conduct ourselves, now is the time to be more transparent, more responsible and more accountable.

“High pay must be for exceptional performance, not mere attendance.

“Corporate and social responsibility must be an attitude running through a business, not a box to be ticked.

“We must fight to regain respect and earn a reputation as the first-choice career destination for the talented and ambitious men and women.

“And improving our gender mix on our boards and delivering diversity in all its forms must be done willingly, not driven by rules but simply, knowing that it makes good business sense.

“And by doing the right thing as businessmen and women and working with shareholders – and nobody who has lived through the last three weeks could say that they don’t have a voice – we will discourage government from doing the wrong thing – by legislating, regulating and micro-managing areas outside their appropriate areas of jurisdiction.”

On the day that the latest employment figures showed 2.63 million out of work in the UK, Sir Roger added: “As we sit here this evening, we all have the huge privilege of jobs, a sense of purpose, of self-worth, of contributing to society.
“Those that have suffered most in the year since we last met are the growing millions of unemployed across Europe – many under 25 – all facing the depressing future of limited job prospects.

“In the UK some woefully ill-equipped to work because of inadequate education – others losing the will to work through lack of opportunity.

“It is for those people that we all must redouble our efforts – government, business, CBI, and our schools – to provide hope and opportunity, if we are to avoid a dangerous breakdown in society that will inevitably simmer and ultimately boil over. If we do not succeed, we have all failed in our duty.”

On delivering a more promising future for all, he concluded: “So those are the truths we must face up to – government and business.

“By so doing, I believe business confidence can and will return. The confidence to invest money now buried in corporate balance sheets, pursue new markets now underdeveloped, and build a sense of future optimism for the next generation.

“Only by doing this will new jobs be created by those who have enjoyed a fortunate past – for those that deserve a more promising future.”