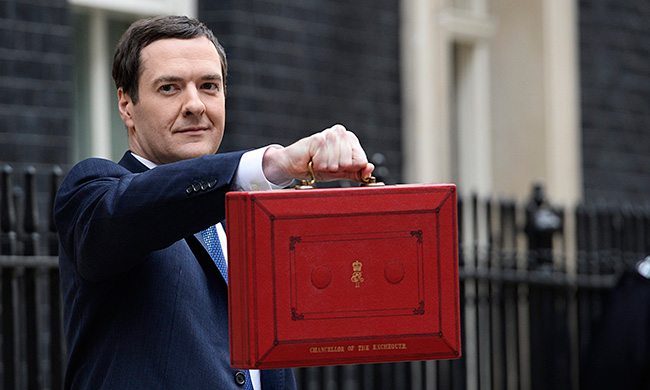 Business
Tax on “diverted profits” to come into effect next month, aimed at multinational firms moving profits “artificially offshore”
Annual bank levy to rise to 0.21%, raising an extra £900m. Banks to be barred from deducting compensation for mis-selling from corporation tax
Changes to EIS and SEIS schemes
Entrepreneurs taper tax relief to be altered and strengthened to guard against abuse
Supplementary charge on North Sea oil producers to be cut from 30% to 20% while petroleum revenue tax to fall from 50% to 35%
New tax allowance to encourage investment in North Sea
Review of business rates
Automatic gift aid limit for charities to be extended to £8,000
Farmers to be allowed to average incomes for tax purposes over five years
New tax credit for orchestras and consultation on tax relief for local newspapers

Pensions
Pension pot lifetime allowance to be reduced from £1.25m to £1m from next year, saving £600m annually.
Law to be changed to allow pensioners to access their annuities, with 55% tax charge abolished and tax applied at the marginal rate

Infrastructure/ & regional highlights
Up to £600m to clear new spectrum bands for auction to improve mobile networks: commitment to deliver ultra-fast broadband to all homes
New powers for Mayor of London over skills and planning
Greater Manchester councils to be allowed to keep 100% of growth in business rates
New inter-city rail franchise for south west of England
Toll for Severn river crossings to be reduced from 2018
Consultation on £1bn “tidal lagoon” in Swansea Bay to generate green energy
Scotch whisky producers see a cut in spirits duty

Savings
New personal savings allowance – first £1,000 interest on savings income to be tax-free for basic rate taxpayers
Annual savings limit for ISA increased to £15,240
“Fully flexible” ISA will allow savers to withdraw money and put it back later in the year without losing any of their tax-free allowance
New “Help to Buy” ISA for first-time buyers will allow government to top up by £50 every £200 saved for a deposit