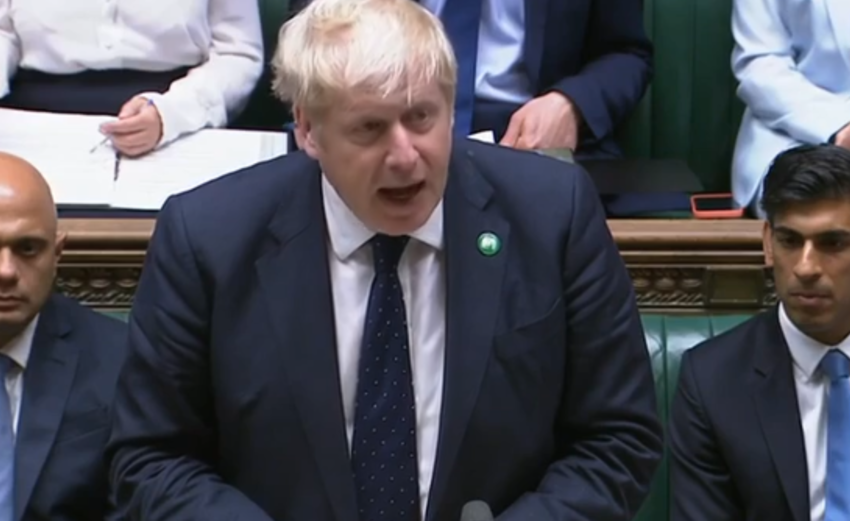 Every worker in Britain will pay a new 1.25 per cent tax on their earnings to pay for a £12 billion-a-year package to fund the NHS and reform social care, Boris Johnson has announced.

In the largest personal tax rise in decades those earning over £67,100 will pay £715 more a year in national insurance from next April. Basic rate taxpayers will pay an extra £180 a year.

For the first time more than 1.2 million working pensioners, who do not presently pay national insurance, will also be expected to pay the new levy from April 2023 as Johnson creates an entirely new tax.

From April 2023 a separate “health and social care levy” will appear on payslips, legally ringfenced for the NHS in the first significant hypothecated tax since national insurance was introduced a century ago.

There will be an additional tax of 1.25 per cent on dividends from share holdings. This increases the dividend tax on higher rate taxpayers to 33 per cent.

The move to include pensioners is understood not to have been in the original plan but was added at the last moment in response to anger from Conservative MPs that the cost of paying for the reform would fall entirely on the shoulders of younger taxpayers who have been disproportionately affected by the pandemic.

The plan will fund tackling NHS waiting lists with the goal of clearing them within three years through an extra nine million checks, scans and procedures, an £86,000 cap on individuals’ lifetime social care costs, a boost for carers’ training and money for councils to stop middle-class care residents subsidising those funded by the state.

Johnson promised the NHS “the biggest catch-up programme in its history” and “a plan for social care to ensure that older people get the best possible care, without the fear or anxiety of catastrophic social care cost”.

In a statement to the Commons Johnson said the money would raise more £36 billion for the NHS and social care over the next three years.

Defending the tax rises, he said the pressures of the pandemic meant it had been impossible to fund the NHS recovery and reform social care without asking people to contribute more.

“It would be wrong for me to say that we can pay for this recovery without taking the difficult, but responsible decisions about how we finance it,” he said. “It would be irresponsible to meet the costs from higher borrowing and higher debt.”

“Governments have ducked this problem for decades,” he said. “There can be no more dither or delay. You can’t fix the Covid backlogs, without giving the NHS the money it needs. And you can’t fix the NHS, without fixing social care.”

Addressing criticism that increasing national insurance was a breach of the Conservatives’ manifesto, he said: “I accept that this breaks a manifesto commitment which is not something I do lightly, but a global pandemic was in no one’s manifesto.”

Johnson insisted that raising national insurance was the fairest way of funding care because it meant businesses would contribute and “those who earn more will pay more tax”.

He told MPs: “Some will ask why we don’t increase income or capital gains tax instead, but income tax isn’t paid by businesses so the whole burden would fall on individuals, roughly doubling the amount that the basic taxpayer could expect to say. Because we are also increasing the dividends tax rate, we will be asking better-off business owners and investors to make a fair contribution too.”

Initially the bulk of the money will go to the NHS to cope with what Downing Street called “one-off significant pressure” of the pandemic backlog, before being shifted towards social care. But the plan has alarmed care chiefs who fear it will be politically impossible to take money away from the NHS, leaving the care system short-changed.

Initially social care has been promised £5.3 billion over two years between 2023 and 2025, almost half of which is earmarked to fund the cap on care costs, with the remainder going to improve quality of care and allow councils to pay higher fees to care homes. This will end a system whereby self-funding residents pay 40 per cent more to subsidise those funded by councils. In addition, £500 million will be available for staff training to help improve standards in a poorly paid workforce where one in three posts is vacant.

After 2025 social care funding will increase as a share of the levy, potentially making billions more available, although details of the transition remain unclear.

No one will have to pay more than £86,000 for their care, with the state picking up the cost beyond this level. The figure is a win for Rishi Sunak, the chancellor, saving the Treasury about £1 billion a year over Johnson’s preferred figure of £50,000.

There will also be changes to the rate at which people start paying for their social care costs. At present anyone with assets over £23,000 has to be for the entire cost of social care. This “floor” will be increased to £100,000.

The tax rise, which is larger than the 1 percentage point rise in national insurance brought in by Tony Blair and Gordon Brown to pay for their NHS reform and investment package, breaches Johnson’s manifesto commitment not to raise income tax, VAT or national insurance this parliament.

Downing Street argued that extra resources were vital to tackle an endemic problem that has eluded successive governments. Private polling conducted by No 10 is believed to show that the public broadly support paying more to fund the NHS and social care.

Johnson’s aides also pointed out that individuals would pay less under the national insurance scheme than if the package had been funded through raising income tax.

This is because employers will also be expected to pay the 1.25 per cent levy. If the plan had been funded by income tax alone, they said, it would equate to a two pence rise in the basic rate.

Sensitive to criticism that forcing employers to pay more could constitute a tax on jobs Downing Street said that small businesses would be protected with 40 per cent not paying an increase at all. It added that firms employing more than 250 people would shoulder the burden on 70 per cent of the additional taxes.

Commenting on the announcement, Andrew Brookes, senior tax manager at accountancy firm, Menzies LLP, said: “The Government is pressing ahead with its proposal to raise funds to pay for much-needed social and health care reform, without addressing some of the underlying unfairness of the NIC system, or the effectiveness of the care sector first. This will make it more difficult to secure cross-party support.

“Many workers and employers are willing to pay higher NICs, if it is clear to them what they are getting for it – in this case a social care system that is fit for purpose. However, the Government should ensure that the system is fair. For example, under the current proposals, as the NIC rate drops from 12% to 2% for higher paid workers  on earnings over £50,000 pa, they could end up paying less proportionately than lower paid workers. In addition, pensioners will pay nothing at all, regardless of whether they receive pay for their employment.

“There is a lot of detail still to come, but based on the limited information released so far, this appears to be very widespread. For example, assuming employer NICs are affected, the proposed increase could add to the cost burden they are facing at a challenging time. If the new levy is introduced on employers next April as proposed, some may need to scale back plans to hire new people or make pay rises. Others may not be able to absorb the increased tax liability and may be forced to make pay cuts. This could be a double whammy for employees, as any cut in pay would come on top of an increase in their own employee NIC payments.

“The Government still has time to get its proposals right and use NICs in a fairer way to pay for much-needed changes to our health and social care system. Self-employed workers need to know where they stand, so they can plan for a future in which everyone is expected to pay tax equivalently on their earnings.”