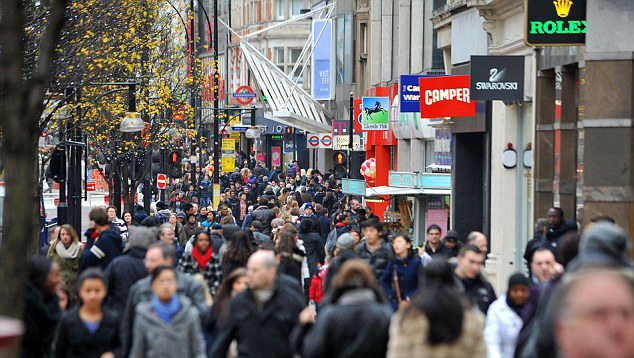 The figures go on to demonstrate that on a total basis, sales were up 4.4 per cent, against a 2.3 per cent rise in February 2012 and if you exclude distortions caused by the timing of Easter in previous years, total sales grew at the fastest rate since February 2010.

Like-for-like sales growth was the fastest since December 2009.

Online sales were up just under 11 per cent over February 2012, when they had risen by just under 10 per cent.

Helen Dickinson, Director General, British Retail Consortium, said: “After the disappointing figures that brought 2012 to a close, it’s reassuring that the sales momentum established during an encouraging January has built not faded. There are certainly highly-welcome signs here of gradual improvement and customers feeling a bit more positive. February saw growth across all parts of retailing, with big-ticket goods and items for the home recovering particularly well, possibly reflecting better conditions in the housing market.

“But it’s too soon to assume this represents the permanent turnaround we need.

“This month’s Budget gives the Government a great opportunity to act to secure real and lasting revival from what could be no more than a short-lived lift. Retail is central to generating the growth and jobs so critical to the UK’s economic recovery but weak consumer confidence is the real and present obstacle.

“Consumers need a Budget that leaves them with more money in their pockets and the confidence to spend it and retailers with the means to invest. I hope the Chancellor seizes the moment.”

David McCorquodale, Head of Retail, KPMG, said: “Whilst one shouldn’t read too much into one month’s figures, February’s data will provide a much needed fillip to retailers’ confidence levels. Against all expectations, retail sales rose this month to achieve the strongest underlying sales growth for three years. Relatively dry, if cold, weather and the occasional day of spring sunshine helped to lift clothing sales as well as drive footfall in the general direction of the department stores, with non-food and furnishing and flooring categories showing strong performances.

“This good overall growth has been achieved despite a sluggish set of numbers from the food and drink sector, where recent events may have caused consumers to change their buying habits within the meat sector.

“The forthcoming Budget will be a pivotal moment for the retail sector. If the proposed rise in business rates goes ahead then retailers will be placed under inexorable pressure. However, if the Chancellor chooses to freeze rates, then he could give the sector some much needed breathing space to tackle the significant pressures it is facing.”