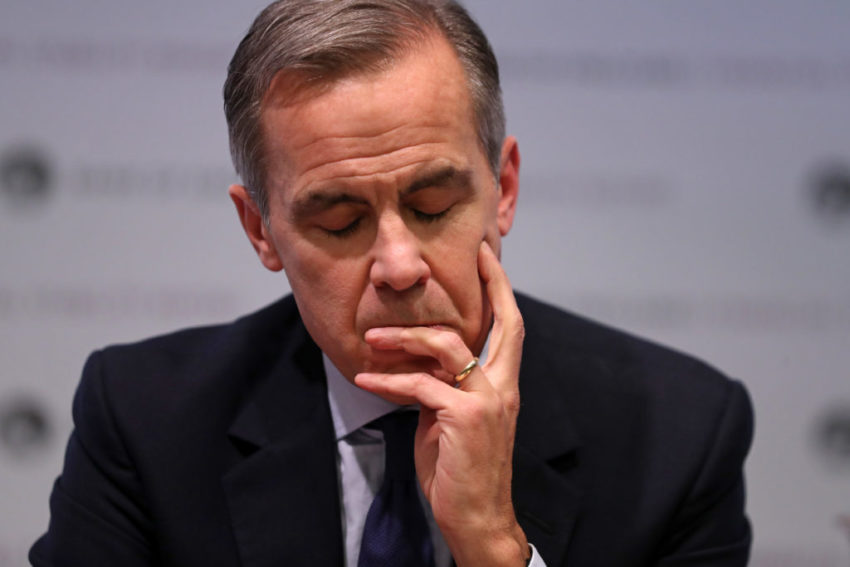 The Bank of England has warned Britain would be tipped into a recession worse than the financial crisis in the event of a no-deal disorderly Brexit.

In the event of a disorderly Brexit, which entails Britain failing to reach an exit deal with the European Union or securing a transition period, Britain’s GDP could fall by 8%, according to a worst case scenario modelled by the Bank.

The unemployment rate would rise to 7.5%, inflation would surge to 6.5% while interest rates would rocket as high as 5.5%.

House prices are forecast to decline 30% and the pound would fall by 25% to less than parity against both the US dollar and the euro, according to the bombshell report.

Governor Mark Carney said: “These are scenarios, not forecasts.

“They illustrate what could happen, not necessarily what is most likely to happen.”

In a disorderly Brexit scenario, the bank said UK trade would decline sharply while the economy will be dragged down by lower labour supply and productivity.

The central bank also said that there could be weak income growth and tighter fiscal conditions, which may weigh on consumer spending and business investment.

Prime Minister Theresa May is aiming to convince sceptical MPs to back her EU withdrawal agreement reached with Brussels.

Parliament is set to vote on the deal on December 11 and if the deal is not approved it will see the UK face a cliff edge, no transition, EU exit.

The Bank’s doomsday analysis came hours after the Government released its own impact assessment, which found that withdrawal from the EU under Mrs May’s plans could cut the UK’s GDP by up to 3.9% over the next 15 years.

But leaving without a deal could deliver a 9.3% hit to GDP over the same period, said the analysis produced by departments across Whitehall.

And the UK will be poorer in economic terms under any version of Brexit, compared with staying in the EU.

The Bank added that in the event of a disruptive Brexit, where there is little or no change to border trade or financial markets, GDP may fall 3%.

In this scenario, the unemployment rate will hit 5.75% and inflation rises to 4.25%.

However, if the Conservatives can strike a deal that sees a “close” economic partnership with the EU, which includes free trade in goods and some trade in business and financial services, GDP could rise by as much as 1.75% over the next five years.

Alongside the analysis of Brexit scenarios, the bank said the country’s major lenders are strong enough to contend with a disorderly the resilience to withstand Brexit.

The Bank concluded from stress tests carried out on banks that they “have the levels of capital and liquidity to withstand even a severe economic shock that could be associated with a disorderly Brexit”.

“The UK banking sector is strong enough to continue to serve UK households and businesses even in the event of a disorderly Brexit.”

The stress tests put the UK’s seven largest banks, Lloyds Banking Group, Barclays, Royal Bank of Scotland, HSBC, Santander, Nationwide Building Society and Standard Chartered, through extreme scenarios, equivalent to the UK crashing out of the EU without a deal.

Mr Carney said stress tests on the UK’s major lenders reveal that the “core of our financial system is strong” and that major banks have “capital ratios three and a half times higher than before the financial crisis”.

The Canadian added that major British banks have “ample liquidity to withstand a major market disruption”.

“They hold more than £1 trillion of high-quality liquid assets and can access an additional £300 billion of liquidity through the Bank of England’s regular facilities.

“Major UK banks now can withstand many months without access to wholesale or foreign exchange markets.”

The Financial Conduct Authority will publish its Brexit analysis on Thursday.