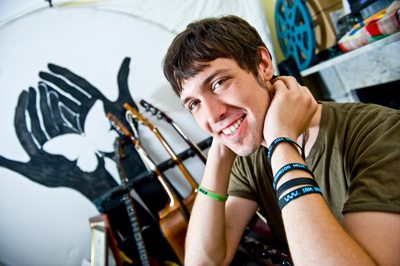 After leaving school, Sam, 22, was desperate to find a job, but he was left deflated when months later he found himself still unemployed.

Sam recalls: “I was applying for so many jobs and hearing nothing back. I felt so unhappy and had no motivation. I literally would have done any job just to earn some money because I was going out of my mind at home all day.”

Sam had always had a passion for music and was playing instruments and writing songs from the age of eight. He said: “Music is all I’ve ever really wanted to do. I used to get into trouble at school for writing songs at my desk or distracting others with my humming away!”

It was around this time that Sam thought he could turn his hobby into a business. Sam said: “I suddenly thought it would be a great way to earn some money and do something I love. I was always playing my music anyway and thought to myself, why not get out there and play to people. I was so unhappy being unemployed it seemed like the perfect idea”

Unfortunately, Sam was quickly disheartened when he realised he had nowhere to turn without the business knowledge and money behind him. He turned to The Prince’s Trust for help and joined the Enterprise programme, which resulted in both financial support from The Trust and a dedicated business mentor.

Sam told us: The Prince’s Trust course was fantastic. It felt great to be listened to and understood and I realised that with hard work and their support I could make a success of myself.

With the funding he received, Sam bought a car so he could play across the region and equipment such as CD’s and recording devices so he can sell his music.

Xclamation Music is going from strength to strength and he plays across the region at open mic night and gigs.

The business has built up a strong reputation and Sam is now offering a live sound service to other bands as well as working with local schools, musicians and youth groups within the community. Sam was recently chosen to play his music at the London 2012 Olympics.

Sam said: If I hadn’t approached The Prince’s Trust I honestly don’t know where I’d be – probably still unemployed and very unhappy. The Trust has quite simply changed my life.