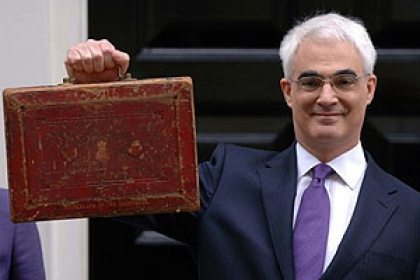 Alistair Darling has turned to YouTube to give a behind-the-scenes look at his last-minute preparations for this week’s budget, which may include up to £15bn of public spending cuts.

In a video uploaded on the Sunday evening ahead of Budget week, the chancellor pledged that – despite the dire economic situation – he is looking beyond the recession and planning for an eventual recovery.

“I want to make sure that we do two things – one is to help people now through this difficult time, but equally importantly we’ve got to prepare for the future, to invest in Britain’s future, to ensure that we can take advantage of the upturn, the recovery, when it comes. And it will come, I’m confident about that,” said Darling.

The chancellor admitted that there has been a “huge downturn” in the global economy, but argued that “in a world where it is expected that activity will double over the next 20 years, there are huge opportunities and I want to ensure we are ready and willing to take advantage of them.”

Wednesday’s speech has already been dubbed “the budget from hell”, with Britain suffering its worst downturn since the second world war. Despite a soaring deficit, Darling is expected to rule out new tax rises, and will instead pledge an extra £2bn for the unemployed and a new environmental package. He is expected to predict that the UK recession will be over by the end of 2009.

According to The Times, he will also insist on £15bn of cuts in public spending, which could hit back-office staff particularly hard. The Daily Telegraph has also reported that the budget will include a £60bn provision to cover losses from the banking bailout.

This is thought to be the first time that the Treasury has posted a message of this nature ahead of the budget, although it has uploaded “behind the scenes” footage and highlights from the G20 Summit.

Darling will deliver the budget at 12.30pm on Wednesday and Business Matters will be covering the event using both our live Twitter feed and also getting comment from leading business analysts immediately afterwards.