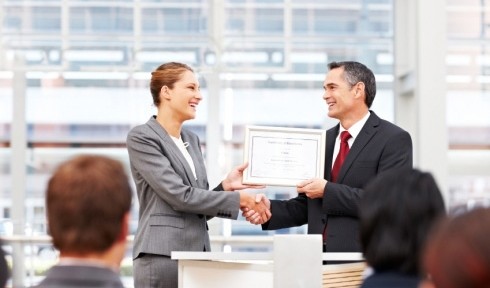 I am sure that when customers notice you have won an award for your business or some aspect of it they probably think that magic awards people go around selecting good businesses and handing out awards – if only that were the case!

When I first started my bespoke jewellery business 13 years ago, it didn’t ever cross my mind to enter an award – in fact I had never even heard of business awards back then.

It was somebody at Stevenage Business Initiative who told me about how valuable local awards can be to a small business and he persuaded me to enter the New Business of the Year award in North Hertfordshire.

So I sat down and wrote out an entry – this took quite a bit of time because I had to sum up my first year of business in a set number of words and ensure that I wrote all of the key points down for the judges.

I was completely amazed when I won.  The publicity was really helpful as the awards were covered in the local papers and so I found that it brought us new customers who had seen the coverage.

Also, suddenly friends of friends who didn’t know what I did started asking me about jewellery.

But perhaps most importantly, we noticed that it gave us a certain edge.

What I mean is that customers considering coming to us were impressed when they noticed that we had won an award.

It gave them confidence in us. It wasn’t only them, as a customer, who thought we might be good – we had an award to prove it.

Over the next three to four years, we entered a few other awards – each time a bigger or better one.

First we won one for the whole county and then we found we came second for a national jewellery award.

The publicity was all very helpful and at the time it certainly felt as though the time taken to fill in the entry forms and write about the business was well worth it because of the ‘return’ in our investment of time if we won or were finalists.

But then I took on more employees and became busier and busier – obviously a good thing because the business was growing.  However, it meant that I simply didn’t have time to even think about entering awards.

We did enter one or two over the next few years but never put enough time into the entry and consequently didn’t get anywhere.

The devil is in the detail

So I asked one of my team to put an entry together for one particular award and as she is very visual, the entry looked great and was really well presented.

However, when we didn’t get anywhere with it I realised that the text she had written didn’t really tick all of the points that they were looking for in that particular category.

I spoke to a friend who was judging an award (not one we entered I hasten to add!).  She explained that when the judges are marking entries they have to go through each one with a set of 10 criteria to look for – each of these criteria gets 1-10 marks for relevance or achievement.

For example, one might be that they are looking for financial growth or for proof of the marketing of the idea – so that information needs to be right there in the entry.

It stupidly hadn’t occurred to me that the judges would be marking these entries in such a methodical way.  I think I had often previously approached the awards thinking that, like marketing a product, you had to give a sniff of bait about the point without labouring it with every fact.

But no – you actually need to labour it with every fact or you just won’t get the marks for that point!

So there is a definite knack or technique to entering awards.  I even notice that some companies specialise in doing your entry for you now.

However, I would never do this because I think that a good entry has to be much more personal than that and also I can’t imagine how a company doing this for you would ever know the subtle points to include to best answer the question for your business.

I have noticed over the few that we have entered that these kind of details are often what strikes a chord with the judges as they then ask about those at interview.

As time goes on these kinds of awards seem to be harder and harder to enter requiring more and more time.  There are more and more questions for you to answer for your initial entry and more and more demanding interviews if you are a finalist.

I’m not sure if this is now because we enter much bigger awards or if they have generally got harder to win.

You need to put the time in

It can be quite hard work putting an entry together.

Most of the awards that I have entered ask you to write a set number of words about the business with the slant being on the particular category that you have chosen.

It has always taken a whole day to write the entry out well – perhaps including a couple of pictures.

This is a large amount of time for a SME whose time is always tight.

For the local awards, that is often enough.  However for the national ones, there now seems to usually be a second stage that you then have to pass too.

This is usually a form of interview in front of a panel of judges.

So for these ones, you firstly invest at least a full day preparing your entry.

You then have to invest a further half-day preparing for the interview and then another full day going to London or wherever it may be, to be interviewed ‘Dragons’ Den-style’ by some judges.

This can be quite scary and in the one I went to a few weeks ago, I even made a mistake with one of my figures and then had to back pedal and change this later.

Under pressure, it is hard not to crumble even if you really do know your facts.

I have noticed some awards where you actually now have to pay just to enter them.

They generally ask you to pay something like £200 to submit your entry which always seems rather a lot as you are not only investing the considerable amount of time taken to prepare your entry but also some cash which you could easily spend elsewhere on something with a more guaranteed return.

So I haven’t yet opted to enter one like that.

Glamour at a price

However, even for awards where you don’t have to pay to enter, you do often have to pay to visit the awards ceremony.  The tickets for this are often really expensive – I noticed one, recently, was £350 per ticket!

So if you manage to get through to being a finalist and want to take your team along to celebrate – be prepared for a big bill.

The other problem is that if you enter and win a few awards and then stop because you just don’t have time to enter them, it doesn’t look so good.

If it says on our website, for example, that we won an award in 2000 I can imagine customers thinking – well great, but have they gone downhill since then?

It probably wouldn’t cross their minds to realise that the reason we haven’t won any is likely to be that we are doing so well that we haven’t had time to enter anything.

So having learned a bit more and having now grown the team further, this year we have decided to enter a couple of awards again after a long gap.

And, I am delighted to say that we have won two major awards, a UK Jewellery Award for Business Initiative of the Year, and Woman of the Year at the Specsavers Everywoman in Retail Awards.

We have also been included in Professional Jeweller’s Hot 100 list and in Retail Jeweller’s list of the top 50 Inspiring Independents – we came in at number 25.

We took many of our team along to various of the ceremonies as a well done for their part in building this business and for their hard work.

It was great to all get dressed up to the nines and enjoy some down time together celebrating our success.

So, are awards worth it?

My advice is that you have to be pretty sure you stand a good chance of either winning or being a finalist in order to invest the level of time required to enter awards.

Otherwise you have just wasted a lot of valuable time for nothing.

It is great to be a finalist even if you don’t win because saying you have been a finalist in a particular national aw
ard is nearly as good as having won it.

If you are reading this as a new business, start with a local award – they are much less demanding to enter and can be really great as a leg-up.

And my advice to you would be definitely to go for it!