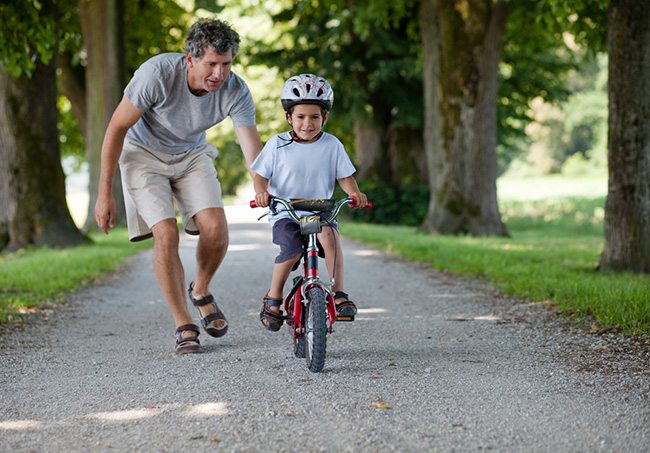 But what has this to do with organisations wanting to succeed with continuous improvement? Grownups at work don’t behave like that, do they? No, Joakim Ahlström says, there is a crucial difference. The child will have to learn riding the bike he or she has, while many organizations chose to invest in a new bike with more features, in the naive belief that it will make their employees better cyclists.

The child eventually realises that the problem has not to do with the bike but the child’s own attitude and ability, while the people of the organization continue to live in denial. In the end the child learns to ride the bike – the approach leads to the desired outcome.

The organisation will soon be cluttered with lots of old and “useless” bikes and for each new bike it becomes more difficult to learn how to ride it – the approach leads away from the desired outcome.

What does the child have that the organisation lacks? A person, who in a loving way and though it might hurt, lets the child know that there is nothing wrong with the bike. In many organizations, on the other hand, we are often quick to agree when someone blames the bike.

When the bike is targeted, we don’t have to approach the real reasons for the undesired results: our own shortcomings. The child however, in spite of the initial reluctance, will have to confront his or her fear and inadequacy. That’s when the miracle of learning, increased self-confidence and improved ability happens.

So, what can you do to reclaim the “passion for riding a bike” in an organization with a distorted self-image and a bike that feels too big? First, throw out all fancy and advanced racing bikes and dust off the tricycle. In other words, get back to the very basics of continuous improvement.

Question every single method, routine, meeting and tool, and get rid of everything that does not serve a purpose. “We’ve always done it this way” is no longer a valid excuse for holding on to old junk!

It is equally important to rid your collective self-image of historical debris. It has taken a lot of damage from all failed attempts. Each time a new bike has been rolled in, instead of the real problems being addressed, the subconscious conviction that you will never succeed has been strengthened.

It’s time to stop running away from that conviction in search of better bikes. Instead, you need to process your failures and get rid of your unproductive and distorted convictions about yourselves. Otherwise you will never dare to jump on the tricycle. Your fear of failure will make you stand on the side claiming it’s beneath you to ride on one of those.

When you’re back at the starting point, your improvement journey can truly begin. To make the most of it, you as a leader and coach should continuously modify your approach based on where you are on the journey. Someone who is learning to ride the bike is motivated by easy-to-reach targets and the highlighting of their progress and improved ability.

A professional, on the other hand, is motivated by bigger challenges and wants the coach to visualize the improvement potential and point out the details he or she needs to correct. If you were to approach a beginner the way an experienced person wants you to, or vice versa, you would completely ruin the fun and kill the desire to learn.

Finally, a repetition of the most important point: Never solely blame the bike! Always look both outwards and inwards. As often as you question the method, you should ask what more you need to understand about yourselves to get the results you want. When you do, you truly begin to build the people that will build your business!