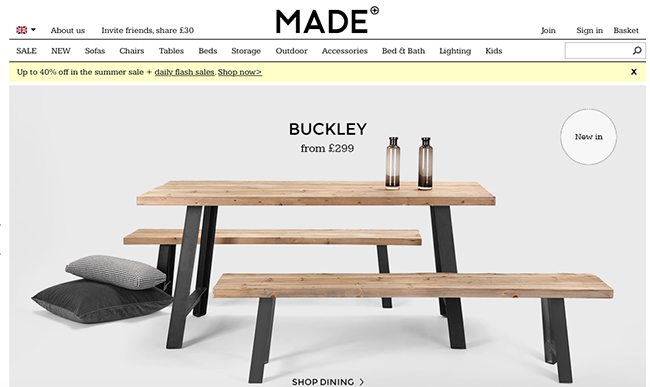 The new funds will be used to support Made.com’s expansion, and will bring an end to months of talks between the retailer and its new investors.

Partech, which has offices in Paris, Berlin and Silicon Valley, has backed internet start-ups such as Getinsured.com and Secretsales.com, which sells designer fashion brands online.

FGPE is an investor in companies including Notonthehighstreet and Seatwave, the online ticketing marketplace.

The two firms’ prospective investment in Made.com will signal that an initial public offering (IPO) of the company is still some way off, despite investment banks having been hired last year to review its options.

Made.com was set up almost exactly five years ago, and is chaired by Brent Hoberman, the co-founder of Lastminute.com.

Hoberman, who also contributed some of Made.com’s initial funding, is a prominent investor in British technology companies, having made a sizeable fortune from the takeover of Lastminute nearly a decade ago.

Specialising in furniture, Made.com recently opened a showroom in London’s Soho, and has collaborations with about 50 designers.

The site sells products at prices up to 70% below their high-street rates, and has set an objective of becoming Europe’s leading online destination for home design.

Made.com entered the French market in January 2013 and Italy eight months later, with a more recent launch in the Netherlands.

During the first half of last year, international revenues accounted for 24 per cent of group sales.

Ning Li, the company’s chief executive, said in January: “The strength of trading through the year, in what remains a challenging consumer environment, is testament to Made.com’s compelling customer proposition, its expanding and unique product offering and its ‘fast fashion’ business model.”

A stock market listing remains a possibility in future, according to people close to Made.com, following flotations by online retailers such as AO.com, the electrical appliances site, last year.